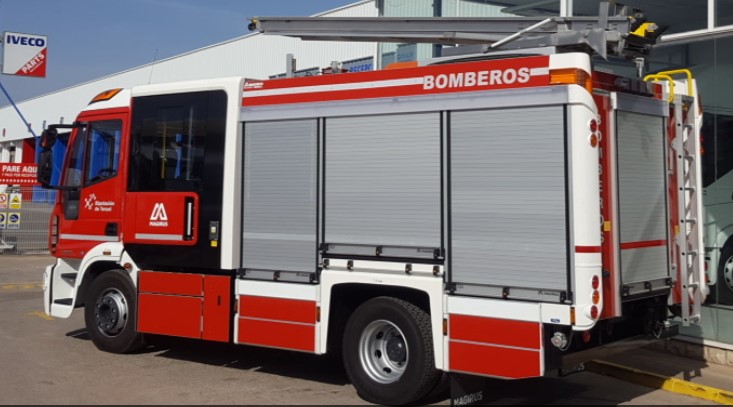 Almeria City Hall has taken delivery of its new fire engine, which was purchased for them by the Almeria Port Authority as part of an agreement signed in 2019 between Ramon Fernandez-Pacheco, the mayor of the city, and Jesus Caicedo, president of the APA.

The presentation of the vehicle – which will be added into the city’s Municipal Fire Fighting Service – took place on the Muelle de Levante, and was attended by the mayor and the president, along with Maria del Mar Garcia Lorca, the Councilor for Security and Mobility,  and Francisco Bretones, Almeria’s Fire Chief.

This agreement, as explained by the mayor, “is part of the commitment and close relationship between the City Council and the Port Authority, which mainly benefits the citizens, firstly because the Fire Station will have a new and modern vehicle that increases its fleet in the event of any incident in the city and province”.

Continuing, “and secondly, because the users, workers, and assets of the Port will be also covered by the fire brigade in the event of any eventuality that may occur in the port area. Undoubtedly, it is an agreement that favours everyone, and goes to show that, when there is a will, public administrations understand each other, and it is the citizens who win”.

Jesus Caicedo also spoke of the value of the agreement with the City Council, something that, according to him, “reflects the magnificent collaboration between both institutions, and contributes to improving the security measures for people and Community property in the Port, as well as the citizens of the municipality, and part of the province of Almeria”.

In accordance with this agreement, the City Council will provide fire extinguishing services at the facilities of the Port of Almeria whenever the intervention of said service is necessary, for a period of ten years, and the APA will be in charge of training the personnel of the Municipal Fire Fighting Service, offering them specialised training in extinguishing fires on ships and floating devices, as well as dealing with dangerous cargoes.

The Port Authority will assume the payment of the registration fees for the courses that will be taught to the firefighters, a total of €350,000 euros – the amount of the vehicle – and another €116,885 for the completion of courses of this specific training during the 10 years that the agreement lasts, as reported by diariodealmeria.es.