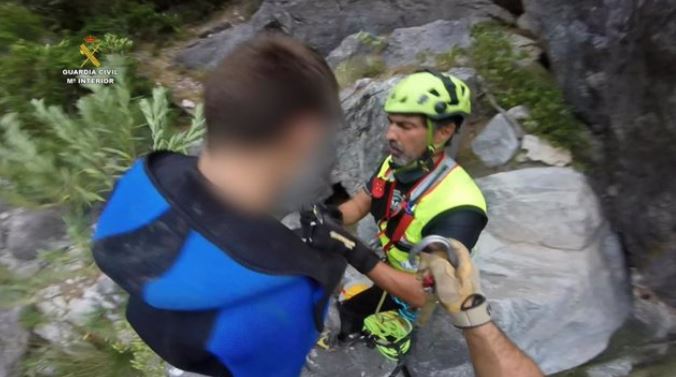 Officers from the Guardia civil rushed to the rescue of five minors and two adults who had gone pool hopping and canyoning. All members of the adventurous party became stuck at the Verde river, in the municipality of Otivar.

What was meant to be fun summer day out turned into a disaster. The day had been intended to be filled with fun bathing in the river Verde along with carrying out adventure sports such as descending some of the pools. The group which was made up of two adults and five children who were aged between 10 and 16 years old ended up in trouble. The group was only “equipped with a swimming costumes and trainers when they started the descent”.

This meant the group became stuck and had to be rescued according to the Guardia civil.

The group had jumped pool to pool but hit a point where “they could no longer continue down or go back up without specific canyoning equipment”. The group were able to leave the river and made an attempt on climbing up a steep slope but this proved to be impossible.

One of the adults was able to make the difficult climb out of the ravine and then headed to get help. Getting help involved a 3 plus hour walk back to the cars to reach a mobile phone. Once there the adult was able to ring the Guardia civil for help.

As reported Europa Press, “At around 7.15 p.m. the Guardia Civil alerted the specialists of its Mountain Service and its Air Unit so that they could go to the rescue of these people before nightfall. The Guardia Civil helicopter began to fly over the river and located the group at around 20.00 hours. The helicopter hovered above them, and the mountain specialists descended to where the minors were.”

The children were all successfully rescued and evacuated two by two back to where the cars had been left. No injuries were reported.