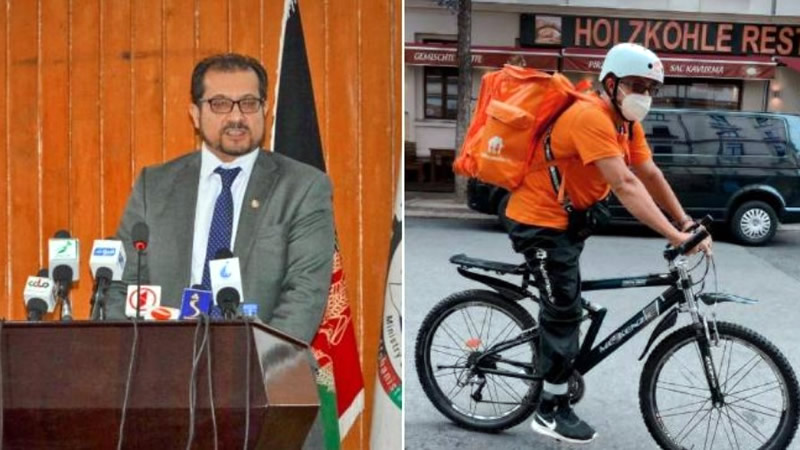 A FORMER Afghan government minister who left the country two years, ago is now working as a delivery rider on a bicycle in the German city of Leipzig

As Minister of Communications in Ashraf Ghani’s government, two years ago, Sayed Ahmad Shah Sadaat’s life was very different, as this engineer with degrees in telecommunications and electronic engineering from Oxford University had risen to one of the most important positions in the Afghan ruling body.

He successfully negotiated with China and India to put satellites into orbit, and improve Afghanistan’s mobile networks, but now, two years after leaving his post as a minister, Sadyed works as a ‘rider’ for Lieferando, in the German city of Leipzig, delivering food to people’s homes on a bicycle.

This 49-year-old Afghan-British citizen, who decided to leave everything behind in Afghanistan at the end of 2020, explained to Reuters, “I have nothing to feel guilty about” although he feared that the Taliban might one day arrive back in power, as they have finally done.
On his arrival in Germany, he applied for asylum, so that, as a refugee, he could start working as a labourer, “Everyone has to pay rent, eat, I could have been a corrupt minister, stolen millions of dollars, bought buildings here, or in Dubai, and not need to work, so I am very proud, and have a clear conscience”, he assures.
Although he could have easily gone to the UK due to his dual citizenship, Sayed chose Germany as his destination, hoping to find a job related to his field of expertise, telecommunications, however, as he does not speak German, his chances of finding a job in that field vanished, and he now studies four hours of German every day at a language school, before starting his shift at Lieferando, where he began working this summer, pointing out, “The language is the most important part”.
Relating his first days as a delivery driver, he recalls that, “they were exciting, but difficult”, as it was a challenge for him to learn how to get around the city on a bicycle. However, he has managed to make the best of it, “The more you go out, and the more people you see, the more you learn”.
In a separate interview with a local newspaper Leipzig Volkszeitung, the former Afghan minister told them, “To get ahead in life, you have to work. I am not ashamed of my work, and I don’t feel inferior. I don’t think Afghans would be ashamed to have a former minister working, but they would be if I received social money”.
After his story came to light, a company has offered him a job in the corporate communications department, as reported by 20minutos.es.