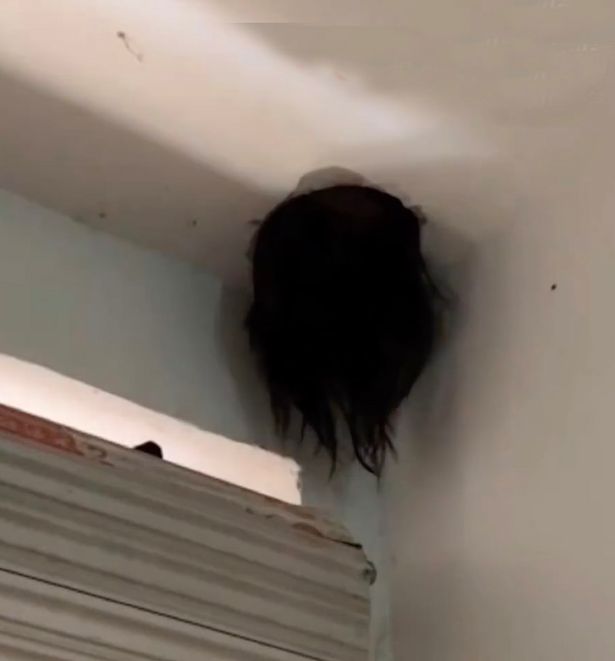 Girl gets head stuck in the ceiling like a horror movie scene in a hilarious freak accident at her home.

A young inquisitive Chinese girl nearly lost her head when she couldn’t resist peering down a hole in the floor of her home. Within minutes of her screaming out, her parents had the emergency services and the local fire brigade out.

The freak accident took place when the curious child found a hole on the ground in the first-floor living room inside their house in Puding County,  southwest China’s Guizhou province.

The father had cut an 8-inch-wide hole so he could fit a vent installation fitting of an extraction fan that was due to be installed between two floors. However, the young girl had no idea, and put her head into the hole before she realised she had become stuck in the corner of the room, the parents actually thought it was hysterical.

Video taken by the fire brigade shows the firefighters coming to the house to find a “scary” head covered in long hair hanging upside down in the ceiling that resembled a scene from a horror movie!

One crew member tries to push the girl’s head while the others are holding her upside down on the first floor. They initially use pliers to expand the opening but were unsuccessful. Then they applied, believe it or not- vegetable oil on the girl’s head and it finally popped free.

Hapless electrician gets head stuck in the ceiling – and his colleague thought it was hilarious!

The electrician, wearing a striped T-shirt, is seen trying to spin around, testing different angles in a bid to remove his head. After struggling for over two minutes, he was still unable to remove his head as his colleague continued to snigger.

It is fair to say he isn’t the brightest spark. It is not known whether he was ever able to free his head…