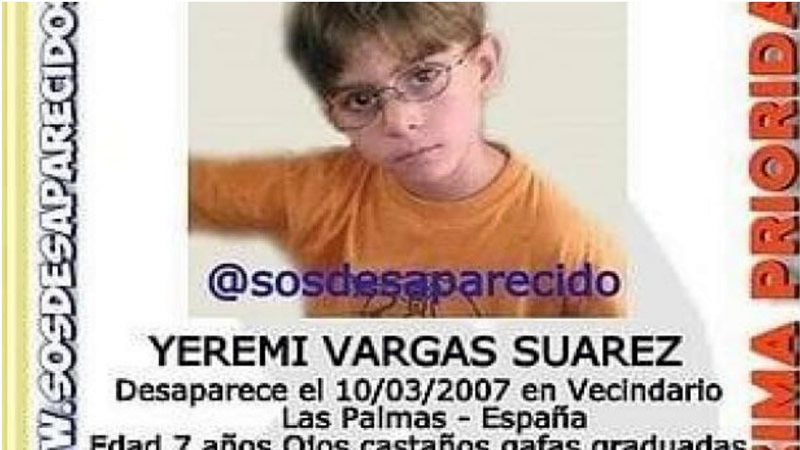 Father of Yeremi Vargas given provisional release after second hearing in a week. image: sos desaparecidos

A judge in the San Bartolome de Tirajana Guard Court in Las Palmas, on the island of Gran Canaria, has today, Friday, September 3, decreed the provisional release with special measures, for the father of Yeremi Vargas, JF Vargas, while he is being investigated for a second alleged crime of sexual assault, this time against the 13-year-old daughter of his ex-partner.

As reported by the Superior Court of Justice of the Canary Islands (TSJC), the man has refused to testify in court, and that the classification of the alleged crime could vary throughout the investigation, which is now in the hands of the Examining Court No3 of San Bartolome de Tirajana.

JF Vargas has been prohibited from approaching or communicating with the complainant, and he will not be able to leave Gran Canaria because his passport has been withdrawn by the court, and he is obliged to appear every Monday before the judicial authority, after appearing in the court this morning following his arrest yesterday, for the second time this week for alleged sexual abuse of a minor under 13.

This second minor told her parents about the alleged events after seeing the story about Vargas’ daughter, also 13, on the news, accusing him of a sexual assault earlier this week, and he was also provisionally released while being investigated, and handed a restraining order by the court, instructing him to stay away from his daughter.

The parents of this second girl filed a complaint in Puerto del Rosario, on the island of Fuerteventura, over events that would have taken place about a year ago, for which the officers took a statement from the minor and detained Vargas, as reported by moncloa.com.