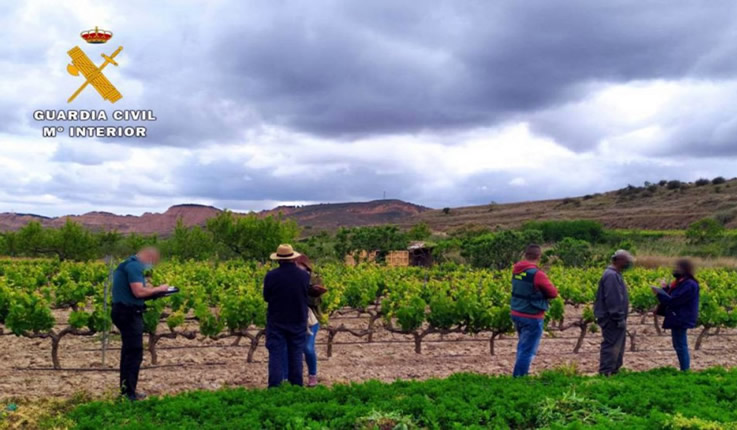 Guardia Civil officers in the La Rioja municipality of Autol have arrested a 49-year-old resident of the town, who is a businessman of Moroccan nationality, on suspicion of conducting an alleged crime against workers’ rights, and another of neglecting to help an injured person.

The detainee allegedly took advantage of the irregular situation and the economic need of citizens of Moroccan and Algerian origin, offering them work on farms for the cultivation of peppermint, coriander, and parsley, and once they accepted, he proceeded to restrict all their fundamental rights in terms of decent accommodation, working hours, salary, extraordinary payments, holidays or medical leave.

He reportedly made them work more than 12 hours a day, seven days a week, receiving in exchange a paltry salary of between €4 and €5 per hour worked, with little food, and accommodation in premises lacking the minimum habitability and hygiene conditions.

On the afternoon of April 1, the Guardia Civil’s 062 emergency number in La Rioja received several calls alerting them to the overturning of a motocultor on the Camorra de Autol road in La Rioja, and that its driver was trapped under the trailer, with all its cargo scattered on the ground.

When officers arrived at the scene of the accident they found a person lying on the ground with serious head and chest injuries, accompanied by the person who had alerted them to the incident, who pointed out that the tiller, his trailer, and the cargo it was carrying, had all disappeared after his phone call.

The investigation determined that the arrested businessman had gone to the scene of the accident accompanied by two others – who have also been identified – but did not go there to help the victim, more to deliberately remove all the evidence that could incriminate him, or relate to him.

It was found that the walking tiller and trailer lacked the mandatory insurance and ITV, which were subsequently found hidden in one of the properties of the businessman, who at all times denied having had an employment relationship with the victim.

His statement was soon dismantled after investigators found a video in which the victim is seen working and driving the rototiller on one of the farms that the businessman has rented, where investigators had taken statements from other citizens of Maghreb and Algerian origin who were exploited and mistreated at work by this unscrupulous businessman.

The accident victim is male, a native of Morocco, in an irregular situation in Spain, without a work contract, and residing in Autol. The serious injuries he suffered after the tiller overturned led to his admission to the intensive care unit of the Santiago Apostol Hospital in Vitoria, Alava, and now the proceedings have been made available to the judicial authority, as reported by cadenaser.com.