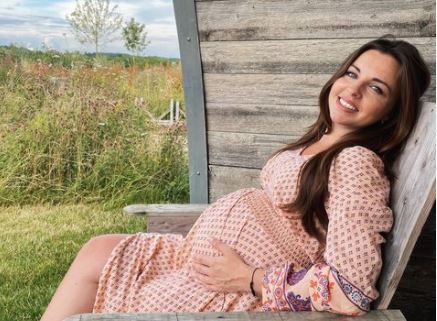 EastEnders star Louisa Lytton gives birth to first baby with fiance Ben Bhanvra. The pair have announced that they are “utterly overwhelmed with love”.

Fans will be delighted to know that actress Louisa who plays Ruby Allen in EastEnders has given birth. Speaking to OK! Louisa said: “And then there were three. Welcome to the world, we are utterly overwhelmed with love.”

Louisa aged 32, announced the fabulous news that she was expecting, back in March on Mother’s Day. She kept fans updated by social media and has shared pictures and videos too.

In one video she showed a card that she had given to her mum. The card said: “Just a little note to say, there’s a baby on the way”.

Fans have been treated to scenes of Ben and Louisa getting ready to become parents and cute scenes such as Ben reading books to the baby. Their pet pooch also joined in, and in one photo was spotted wearing a neckerchief saying: “My parents are getting me a human.”

Louisa was worried about switching off and relaxing as she began her maternity leave and previously told fans: “I’ve just finished work which is so surreal. I’ve been told that now is my time to finally switch off, sit back and relax – which if I’m honest, I find really difficult.

“The only thing that I managed to do to sort of switch off really is reading.”

In other celeb news, Gemma Collins reveals she has quit The Only Way Is Essex for good, and ‘won’t do it again’.

Fans will be disappointed to find out that Gemma has ruled out returning to the hit ITVBe program. She believes that it is time to move on, but she has other projects in the pipeline.

Speaking to the Daily Star Gemma said: “I love The Only Way Is Essex. I wish them all well, but no, I won’t do it again. I’ve moved on,”

“Honey, I’ve got Valentino dressing me now. Do they really need to see me back down Brentwood High Street?”