Andalucian President Juanma Moreno will get vaccinated this week 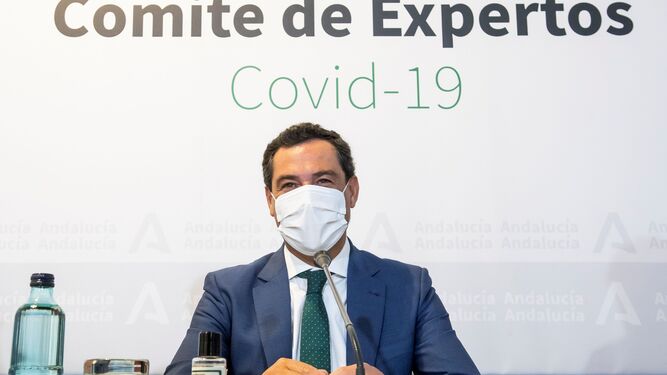 Andalucian President Juanma Moreno will get vaccinated this week.

The president of the Junta de Andalucía, Juanma Moreno, has announced that on Wednesday, September 8, he will get the coronavirus vaccine, something he could not do before because of contracting the disease and has encouraged around 800,000 Andalucians who have not yet have been vaccinated to go to their local health centres and do the same.

Moreno said he hoped that “as soon as possible” vaccinations for those under twelve years of age can start.

Moreno announced his appointment today, Monday, September 6, in an interview with Canal Sur Radio, where he pointed out that he hopes that his eldest son, who is twelve years old, will also get the vaccine next to him on Wednesday.

Moreno has shown his concern that, given that the Constitution leaves “little space” to establish the mandatory nature of vaccination the central government has not developed a basic state regulation that would allow communities to have the ability to decide that those people who work with vulnerable population groups, such as the elderly housed in residences, and who refuse to be vaccinated, will have to undergo a daily test to see if they have the disease or not.

The president wanted to make it clear that the 42,000 elderly who are in residences in Andalucia are closely monitored through the Andalucian Health Service (SAS) and that a seroprevalence study will be carried out to see what level of immunity they have after have been vaccinated about seven or eight months ago and if it will be necessary to give a third dose of the vaccine.

Regarding the return to classrooms, the president wanted to make it clear that the vast majority of Andalucian teachers have been vaccinated.

Teachers who have refused to be vaccinated will be allocated other tasks so that they are not in contact with the children and will be monitored on a daily basis through tests, added the President.