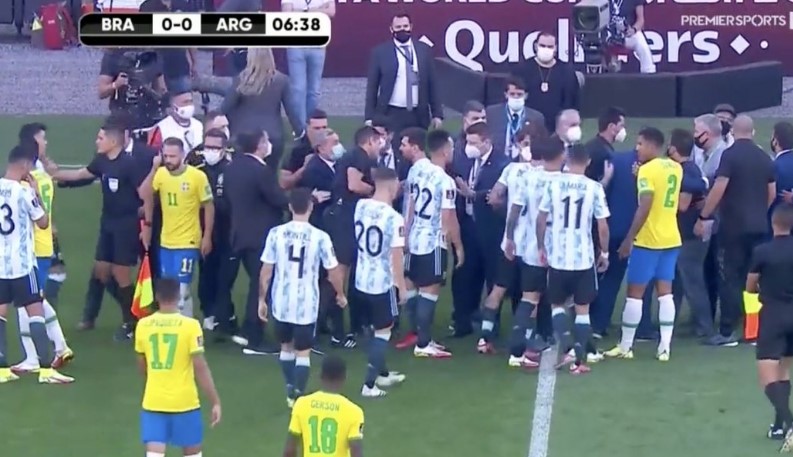 In an unprecedented turn of events, today’s Qatar 2022 World Cup Qualifier in Sao Paulo, between Brazil and Argentina was abandoned, when Brazilian health officials took to the pitch accompanied by Brazilian Federal Police officers just six minutes after the game had started, to confront Argentinian players they were accusing of breaking coronavirus rules.

The Argentina team walked off the field, leaving captain Lionel Messi, with the health officials and the managers of both teams, who held a discussion on the pitch, which resulted in the match being abandoned, with CONMEBOL, the South American football confederation confirming that the match was called off by the referee.

A disciplinary report will now have to be submitted to FIFA, and the president of Brazil’s health agency Anvisa, Antonio Barra Torres, has allegedly said that four Argentinian players will be fined and subsequently deported from Brazil for allegedly not complying with coronavirus protocols, after he had apparently already asked for the immediate isolation of the same four players prior to the game.

Coronavirus rules in Brazil state that anybody arriving from the UK – which was the case with the four Premiership players – must isolate for the mandatory 14 days, and while Anvisa refused to publicly name the players, the only four who play in the Premier League, and who had flown in from Caracas last Friday with the rest of the squad – are Cristian Romero and Giovani Lo Celso of Tottenham, and Emiliano Martinez and Emiliano Buendia of Aston Villa.

In a statement issued before kick-off, Anvisa said, “Anvisa considers the situation a serious health risk, and so has asked local health authorities to determine the immediate quarantine of the players, who are stopped from participating in any activity, and should be prevented from remaining on Brazilian soil”.

Anvisa also claim to have been tipped off to the fact that all four players had been in the UK during the last 14 days, but had not stipulated that on their immigration forms, which is clearly being interpreted as them giving false information to the health authorities.

Claudio Tapia, the president of the Argentine FA was very clear with his words, “There can’t be any talk of lies here, because there is health legislation under which all South American competitions are played. Health authorities in every country approved a protocol that we have been fully compliant with”.

Adding, “What’s happened today is terrible for football and sends out a very bad image. Four people interrupted the game to inform us of something and CONMEBOL asked the players to go to the dressing room”.

Lionel Messi commented, “We’ve been here for three days and they waited for the game to start to tell us we couldn’t play? The world is watching us”, as reported by skysports.com.

Video of World Cup qualifier being stopped in Brazil over English-based Argentina players’ quarantine status with health officials going on the pitch pic.twitter.com/vKFvcdIycG