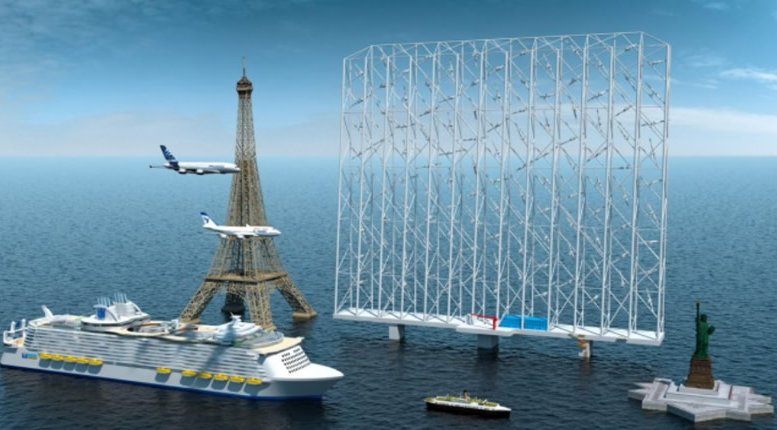 A FLOATING multiturbine that is taller than the Eiffel Tower is capable of supplying electricity to more than 80,000 homes

In the midst of the uproar caused by the threat of the Nuclear Forum, made up of 32 companies and power plants in Spain, who are threatening the Government with closing down all closing nuclear activity, other proposals are coming to light in Europe that could be useful when reducing the price of the electricity bill.

The constant rise in the cost of electricity is a topic that is generating debate not only in Spain, but also around the world, as prices are rising everywhere post-pandemic, leading companies and other specialists within the energy sector to continue to investigate new ways of producing energy through renewable sources, especially in the field of wind energy.

As a result, a Norwegian company called Wind Catching Systems has designed a floating multiturbine project that will apparently be more efficient than traditional turbines, and its objective is to install windmills in the sea that allow the production of electricity more easily than on land.

Wind Catching Systems has explained that its intentions are to combine more than 100 one-megawatt turbines that will have an efficiency five times greater than the current largest turbine in the world, which will be able to take advantage of higher wind speeds by having shorter blades than traditional turbines, and the result is it can provide power to up to 80,000 homes.

Also, their lifespan will be up to 50 years, and their maintenance will be cheaper than the floating systems that are currently operating, although these new multiturbines will stand up to three times taller than conventional turbines, at around 305 metres, which to put into scale, is higher than the Eiffel Tower in Paris, France.

By being placed on top of a floating platform which is then anchored to the seabed, its installation and maintenance is allegedly cheap and simple, and allows floating mills to be built further offshore, thus taking advantage of stronger ocean winds, with Ole Heggheim, CEO of Wind Catching Systems, saying that these floating multiturbines will start operating from 2022, or 2023, as reported by 20minutos.es.