My first game of Golf 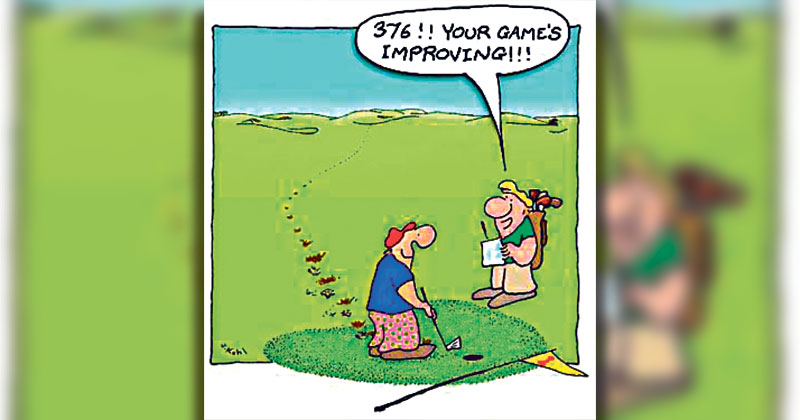 I WAS thrown in at the deep end. The only thing I knew about Golf was that it had a little sister called Polo. I thought a birdie was when you knocked a rook out of a tree-top. And here I was at a clubhouse in Pennsylvania with three business colleagues, enjoying a coffee and a croissant before my first game.

It was a Ryder Cup match with a subtle difference. Roberto from Italy and I were to represent Europe while Sato (Japanese American) and Sam (Welsh American) flew the Stars and Stripes.

Sato helped me hire a bag of clubs and some shoes and Sam explained that we would be playing nine holes. Eventually the moment of truth arrived; time to tee-off. After several flailing air-shots and a couple of divots, I watched unimpressed as the offending club finally made contact and the ball dribbled its way to a position about 10 metres to the left of the tee. I detected a politely suppressed snigger behind me.

To cut it short at this point, I got the first hole in 25 shots. There was room for improvement. The second needed only 19. Ah, but that was a short one. When I got the third in 21, I was thinking: “I could get quite good at this.”

But then I landed in a bunker; at least, my ball did. “Time for a sand wedge,” said Roberto. “But I’ve just eaten a croissant,” I protested. Roberto explained the purpose of the sand wedge, while the two Americans chortled audibly. I took the odd-looking club and was wondering how it is possible to hit a ball in a bed of sand up a slope. It seemed extremely difficult – rather like trying to play a Chopin prelude with boxing gloves on.

Between the bunker and the green, I managed to get into the rough, a rare achievement, according to Sato. I swiped, hooked, hammered and sliced the ball in an embarrassed rage for about five minutes before landing on the fairway again. This time there were uncontrolled howls and snorts of laughter. And not only from my three colleagues. By now we had let four pairs pass through – two of them amused, two of them angry.

I began to feel tired. At the beginning of the seventh (I had taken 131 shots so far), Sam reminded me “You need the driver again.” I had visions of an electric caddy being driven up to take over the transport of the clubs, but we pressed relentlessly on. Eventually I managed a 20-centimetre putt into the ninth hole and it was game over.

And so, we arrived at the 10th hole – the clubhouse bar. I ordered four beers and Roberto took out his calculator. The final scorecard told no lies. The scores were 48; 56; 172; 55.