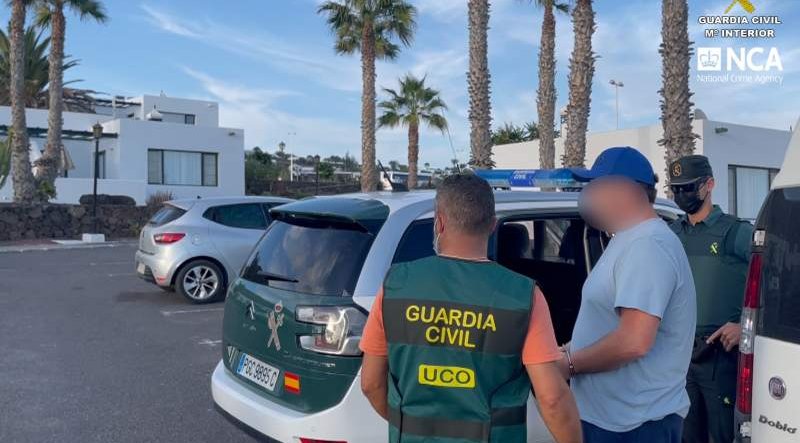 The Guardia Civil has arrested a British fugitive linked to the Kinahan gang on the island of Lanzarote.

The Guardia Civil has arrested a 38-year-old British fugitive linked to the Kinahan gang on the island of Lanzarote.

The detainee is under investigation for the introduction of large consignments of cocaine and money laundering.

He was a member of the criminal organisation led by Thomas Kavanagh, a confidant of the Kinahan clan in the UK, working on several occasions on their behalf in organised crime.

In July, a trial was held in the United Kingdom where the detainee appeared via video call, explaining that it was impossible for him to take a PCR test in time.

The British judge then decided to issue an arrest warrant.

This arrest is the result of the collaboration between the Guardia Civil and the British NCA (National Crime Agency).

An operation was initiated in Lanzarote by the Team of Fugitives of the Guardia Civil. The detainee was said to have been in a house in the municipality of La Asomada, where he and his wife ran a boat rental business and had been residing since 2017.

The arrest was carried out yesterday, October 22, on the terrace of a bar near his place of residence. Following several hours of discreet monitoring of both him and his most direct environment, the officers considered the ideal time to act safely.

The Fugitive Team and uniformed members of the Guardia Civil of Las Palmas carried out the arrest.

The detainee’s boss, Thomas Kavanagh, is currently serving a three-year sentence that was imposed last year for possessing a stun gun disguised as a torch.

The detainee in question is currently awaiting charges for the same crime.

Kavanagh is considered the most important representative of the Kinahan organised crime group in the United Kingdom and coordinated the group’s activities from a secure mansion in Birmingham that was fitted with bulletproof glass.

He is also the brother-in-law of David Byrne, who was shot dead in the 2016 shooting at the Regency Hotel in Dublin.

This important arrest is in addition to the arrest of Gerry Hutch, known as “The Monk.”

Hutch was arrested last August and was the leader of the Hutch Clan, a recognised rival of the Kinahan’s in the struggle for the control of organised crime in the Republic of Ireland.

This confrontation between clans is known in Ireland as the ‘Kinahan – Hutch feud.’

The detainee has been handed over to the Central Court of Instruction No. 6 of the Audiencia Nacional, which has ordered his imprisonment pending extradition to the United Kingdom.