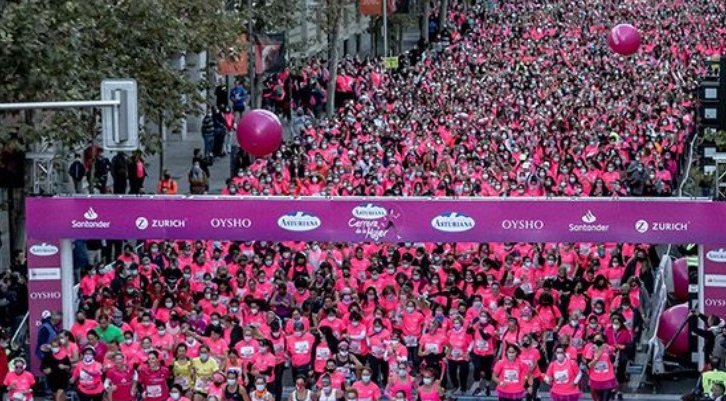 Madrid turned pink again today, Sunday, October 24, as 18,000 women ran through the streets in celebration of the ‘Women’s Race’, an event designed to launch a message of encouragement in the fight against breast cancer.
There were fewer participants than in previous years, as the organisers had decided to limit numbers to comply with coronavirus health protocols. Due to the ongoing works in the Plaza de España, the itinerary had to be changed.
As a result, the race started from Calle Serrano, next to the National Library, and ended, as usual, in the Paseo de Camoens, after passing through the Puerta de Alcala, Cibeles, and Plaza de Colon.
In both the physical and virtual races, participants wore the number 016 to contribute to highlighting the helpline number for victims of gender violence that leaves no trace on the bill.
Huelva-born Carolina Marin, Spain’s Olympic and world badminton champion made an appearance at the event in her capacity as an ambassador for Banco Santander. Marin is still recovering from an injury to her left knee that prevented her from defending her Olympic crown at Tokyo 2020.
Among other participants were the members of the ‘Transplant’ team, made up of 12 women who have undergone a transplant, or are in the process of receiving one. Also present were members of the ‘Solidarity Slippers’ project, led by Javier Rosado. This initiative supports homeless or at-risk people, using sport as an escape outlet.
Throughout its 16-year history, a total of 1,150,000 women have taken part in the ‘Women’s Race’, which has raised more than €1 million for solidarity projects.
Among its priority objectives are the effort to incorporate women of all ages into the regular practice of sport. As well as fighting against breast cancer, and raising awareness about the prevention and maintenance of healthy habits to combat gender violence, or social and educational inequalities.
‘La Marea Rosa’ maintains its spirit of solidarity with a donation to the Spanish Association Against Cancer at the end of the race. It also lends financial support to three foundations focused on protecting women in different areas: Wanawake Mujer, Pulseras Rosas, and Clara Campoamor.
The Madrid Women’s Race also collaborates with the #retogema, led by the athlete Gema Hassen-Bey. She has been a pioneer in Paralympic fencing and won her first medal at the Barcelona ’92 Games for Spain. Currently, Gema is preparing to be the first woman in a wheelchair to reach the top of the roof of Africa, Mount Kilimanjaro, at 5,895 metres, as reported by 20minutos.es.