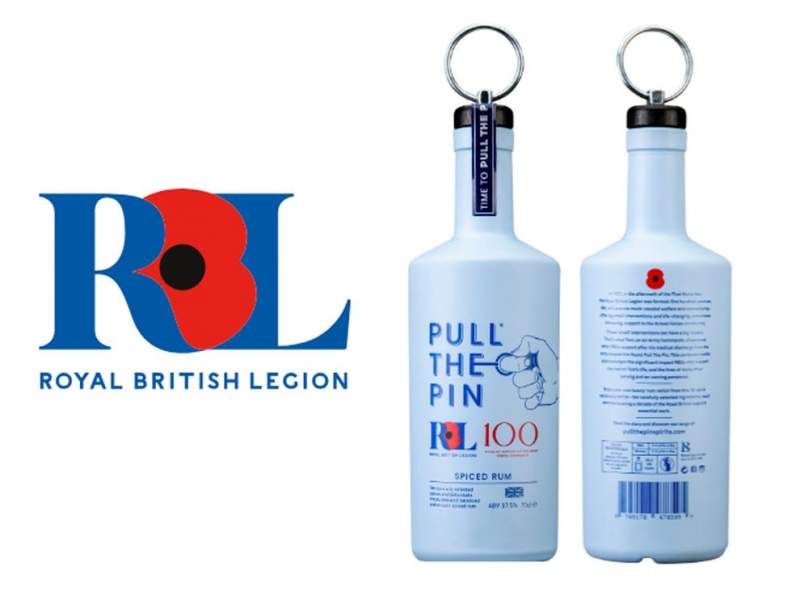 The Royal British Legion (RBL) has removed from sale a grenade pin rum that was designed to commemorate its 100-year anniversary following complaints from the public. The rum was branded with messages of “Pull The Pin” and features a ring-and-pin design most known to be the detonator of the handheld weapon. The drink was removed from sale on Armistice Day.

The charity said it will review the availability of the drink, and tweeted a statement: “Following a number of complaints, we are undertaking a review of the Pull the Pin rum on our Poppy Shop and therefore we have removed the product at this time. This course of action has been taken as it is important we now focus on Armistice Day and the Remembrance weekend, however, we remain committed to supporting our veteran community in their employment after service.”

The rum is made by Pull the Pin spirits, founded by a former member of the armed forces, Tom Foster and business partner Kerry Carter. They are based in Devon. All of their spiced and flavoured rum products feature the signature grenade pin rum lid and the firm created the RBL edition to give thanks to the charity for the help they give to veterans.

Mr Foster was an engineer before he was medically discharged in 2018, and he said he was given valued support by the RBL at the time of his discharge. He added in a statement: “I have put everything into creating a company that brings people together and can raise awareness for causes we believe in. Giving back and gratitude are two of our core values and over the past two years we have had different projects all to raise money and awareness for charities [such as] rock2recovery, Normandy Memorial Fund [and] RBL, which are of course very close to our hearts.”

“In the media recently there has been an incorrect link between the bottle and ‘celebrating’ remembrance as well as linking the bottle to a grenade. Neither of which is what the bottle is for or about and it saddens me immensely that this has happened, especially today. We are an active part of the military and veteran community and develop our military-linked products with them. I am very thankful for the incredible support from them especially with this commemorative rum.”

“We are saddened that the bottle is removed from sale and is prevented from continuing to raise funds and highlight the valuable work that the RBL continues to do.”