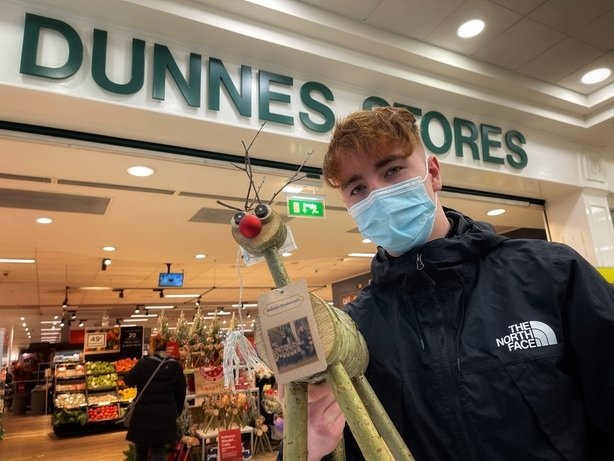 Christmas is always a festive and cheerful time and there is nothing more pleasing than some good news at this time of year. A Co Offaly teenager’s efforts to make some extra money has resulted in Dunnes selling Irish teenager’s reindeer.

When asked about Dunnes selling the teenager’s reinder, Anthony said: “It was about a week after I was interviewed by RTÉ Dunnes Stores contacted me on Instagram. At first, I thought it was a scam, so I left it for a couple of days. But then I opened it and couldn’t believe it – Dunnes Stores wanted to do business with me! Ever since then, it’s just been back and forth, trying to organise it all.

“My reindeer are now in 15 stores all around Ireland. When I go to Tullamore, I can see them in the Dunnes there. People are going in to get their shopping and putting them into their trolley. I still can’t understand it!”

Donna Monaghan, Assistant Manager at Dunnes in Tullamore Bridge Centre said “We’ve had so much interest here because Anthony is local. Customers are coming in and asking, ‘Are these Anthony’s reindeer?’ I just think it’s great that we are supporting such a young guy who is so talented.”

Anthony who is hoping for 6,000 sales this Christmas, is trying to save money to buy a new phone. He never thought a store like Dunnes would sell his reindeer, nor did he expect sales from abroad. To his surprise he e is “even getting orders from abroad including five from Australia.”

After investing in a new workshop and some more tools, Anthony has been able to use some of his profits to buy a very special present for his father, Philip, last Christmas.

“Da hadn’t been well at all with cancer. Thankfully, he’s now fully recovered. But it hadn’t been a good year for his business either, just as it had been a horrible year for every small business. He had always wanted a tractor, so I decided to buy him one for Christmas.”

Now that Dunnes are selling the Irish teenager’s reindeer it is hoped that it will give encouragement to other youngsters who are trtying to build their businesses.