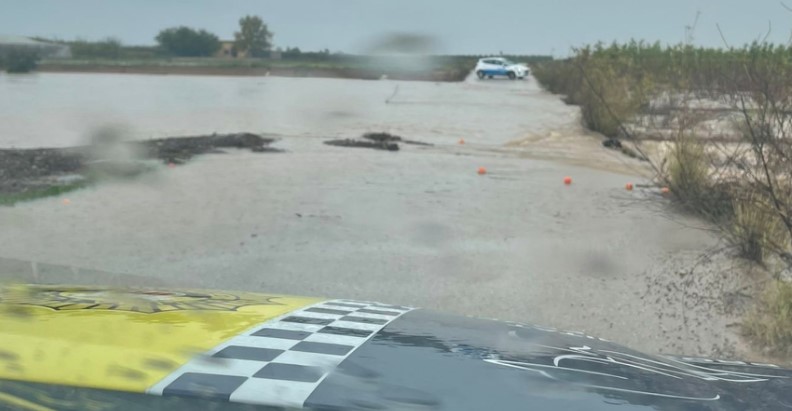 Heavy rainfall during the morning of Saturday, November 20, saw existing records broken in some municipalities of the Valencian Community. Sueca recorded 83.2 litres/m², while in Polinya de Xuquer the accumulation was 74.4 litres/m². The towns of Algemesi with 58.6 litres/m², and 56.2 litres/m² in Barx, also suffered badly.

Several municipalities saw road closures as water levels rose quickly. According to reports from their respective authorities, the Camino de l’Arrabal, the Pere el Gran avenue (Jaume I polygon), and the CV-42 at Km12 were cut in Algemesi and Benifaio. In the latter, even the cemetery was closed off as a precaution.

Starting from around 7am, firefighters were called into action to rescue the occupants of two vehicles trapped by the water in Alginet. They were eventually towed to safety. According to sources from the Valencia Provincial Fire Brigade Consortium, crews also intervened to clean up buildings after rubble fell due to the strong winds in Foios, Piles, and Quart de Poblet.

Although with less intensity, rainfall also affected the municipalities of Real, Quart de Poblet, and Guadassuar, which have exceeded 30 litres/m², specifically 37.2, 36.8, and 34.4, respectively. This was according to data from the AEMET networks and the Jucar Hydrographic Confederation, as collected by Europa Press.

An orange level warning has been activated by the Generalitat Emergency Coordination Centre, and remains in place until 4am this Sunday on the south coast of Valencia. In the north of Valencia, and south of Castellon, the warning is yellow, also until the same hour.

Rainfall has been persistent since dawn on Saturday 20, especially on the coast of the province of Valencia. It was more abundant in La Ribera, l’Horta Sud, areas north of La Safor, and south of the city of Valencia. Alzira recorded 24.6 litres/m², Valencia airport 23.9 litres/m², 19litres/m² in Valencia city, 10.8 in Carcaixent, and 4 litres/m² in Lliria, as reported by lasprovincias.es.