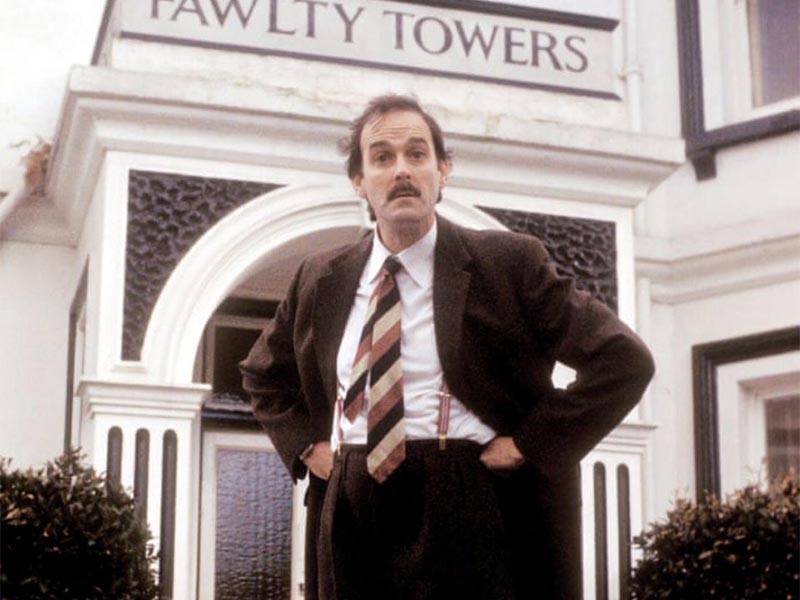 Fawlty Towers needed only one catchphrase.

WHAT is the lowest form of wit? Tradition says it’s the pun, but some puns are very clever and very funny. To me, however, it’s the catchphrase that lurks in the relegation zone of brands of humour, possibly propped up by bland ‘jokes’ in bad taste.

Catchphrases are so painfully contrived. Scripts have to be adapted solely to accommodate them. Yet, as far back as I can remember, radio and television audiences have howled with laughter as an otherwise talented comedian has repeated week after week an inane phrase that was never funny in the first place. From Tommy Handley’s ‘ITMA’ in the 40s (“can I do you now, sir”) to Boris Johnson (“let’s get this thing done”) people seem to have found them amusing – albeit, in the latter case, equally irritating.

In the 50s listeners spluttered with mirth as a character in Ted Ray’s ‘Ray’s a laugh’ repeated predictably every week “it’s that ginger tom from next door.” Later that decade, it was the sound of a splash followed by “he’s fallen in the water” recited by Spike Milligan in the otherwise hilarious ‘Goon Show’. Audiences in the recording studio or glued to the radio in the privacy of their homes chuckled themselves into tears.

Max Bygraves chose “A good idea, son!” for his weekly offering. Hilarious! His radio fans shuddered with helpless laughter as the show continued, week after week.

“Nice to see you; to see you, nice.” A cacophony of cackles and snorts greeted Bruce Forsyth’s highly irritating ritual, without fail.

Where is all this leading? In the more sophisticated class of comedy, the unexpected adds to the effectiveness of the line that is delivered. A good raconteur would maintain the suspense until he reached the punch line. A stand-up comedian would keep the viewer amused from beginning to end through his delivery. In their different ways, both the multi-talented Peter Ustinov and Jasper Carrot had this mastered.

Some sketches had predictable endings but were saved by the ups and downs of the monologue or dialogue leading up to the denouement. The Two Ronnies excelled in this. Apart from a clever parody, their sole catchphrase was their parting shot: “it’s goodnight from me and it’s goodnight from him.” This was not intended to be particularly funny and it did not interfere with the programme. Peter Cook and Dudley Moore tended to become more outrageous – and funnier – as the sketch progressed. They, too, had no time for catchphrases.

In Fawlty Towers it was predictable that Basil Fawlty would blow a gasket at any moment. But his delivery of rage, impatience or sarcasm took many different guises. His facial expressions, his movements and his language were not only hilarious, but unpredictable. There was no need for more than one catchphrase in this series: “He’s from Barcelona.”