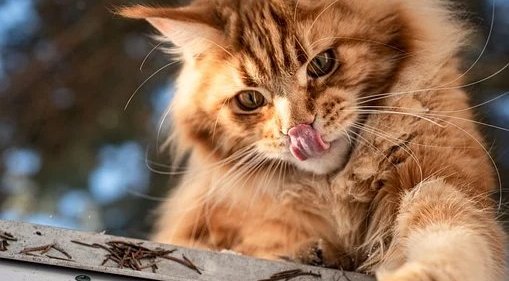 Cat saves its own from a potentially lethal shopping surprise in Australia.

Ricky Owens was saved by his pet cat’s peculiar behaviour. Ricky had left home for a few hours to do the shopping and had left one of the doors open slightly at his home in Australia. During the couple of hours he was away a huge tiger snake managed to make its way into the house.

Tiger snakes are venomous and both Ricky and the cat were in danger. When he returned home his cat Gordon was acting strangely. Gordon was hissing and scratching and kept attacking one of Ricky’s armchairs. Ricky was surprised by Gordon’s behaviour so lifted the furniture. He did not see anything strange there though.

Ricky headed off out and went to a local bar. When he came back home though Gordon was still behaving peculiarly. Gordon was scratching at one of Ricky’s shopping bags from earlier in the day. Ricky picked up the bag to be greeted by a metre-long poisonous snake.

Ricky commented: “The cat, the snake and I jumped up in the air.” The snake tried to hide under the fridge but was still partially visible. He added: “I didn’t know which end was the biting end and which was the tail”.

Ricky made a brave move and grabbed the snake before throwing it over his back fence. Ricky commented on the incident and said: “If your animal does something in the house that it doesn’t usually do, be aware of it”.