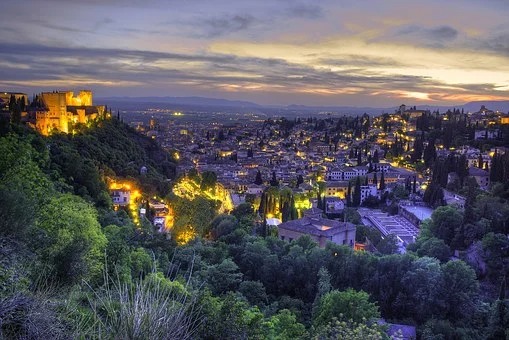 Granada is a spectacular place for both international and national tourists to visit. The city is the capital of the province of Granada and it belongs to the autonomous community of Andalucia. The city is full of artistic and architectural monuments and it is a great place to enjoy real Spanish culture and food.

The oldest section of Granada can be found in the north-east of the city and is called the Albaicín (Albayzin) quarter. The area is full of Moorish style houses and narrow cobbled streets which are delightful to wander around and take in the atmosphere.

Places to visit in Granada.

When visiting Granada one of the must-see places is the Alhambra. It is the most visited attraction in the city. The “Red Palace” was built by Moorish rulers in the 13th century and covers a staggering 140,000 plus square meters. The three main parts that wow tourists include the Alcazaba military fortress which was built in the 11th century. Visitors can climb the towers and make the most of the stunning views that the city has to offer. A stroll around the sultan’s summer residence called the Generalife is delightful and features amazing gardens and fountains. The Nasrid Palaces should not be missed either.

The Albaicin neighbourhood should also make it onto any visitor’s must-see list. A stroll through the area will reveal whitewashed houses and narrow paved streets full of character. This is a perfect place to try out some Arabian style food or purchase oriental dried fruits and spices. Many restaurants can be found locally in the former Arab neighbourhood.

The flamenco shows available in Granada are an excellent way to spend an evening full of music and dance. Granada is said to be the birthplace of flamenco which makes it one of the best places to see a traditional show.

Traditional flamenco shows can be found in the Sacromonte neighbourhood. Many bars in Granada also offer amazing flamenco shows. The Jardines de Zoraya offers stunning shows along with excellent food.

Granada is also a great place to get in a bit of shopping. The lively streets are filled with both local and international brands and there are also many places to stop off for a coffee. Granada is the perfect place to find gorgeous coloured glass lamps and jewellery along with trinkets to take back home for the loved ones.

If you are spending more time in Granada, then a trip to the Arab baths is certainly recommended.  Granada is home to “El Banuelo”. These Arab baths are the best preserved in Andalucia.

The Sierra Nevada is only a short trip away from the centre of Granada. It is an excellent place to get in some snowboarding or skiing in or just take in the atmosphere with a warming hot chocolate.

Transport in Granada city is excellent and cheap buses allow tourists to easily visit all the main attractions without getting worn out.