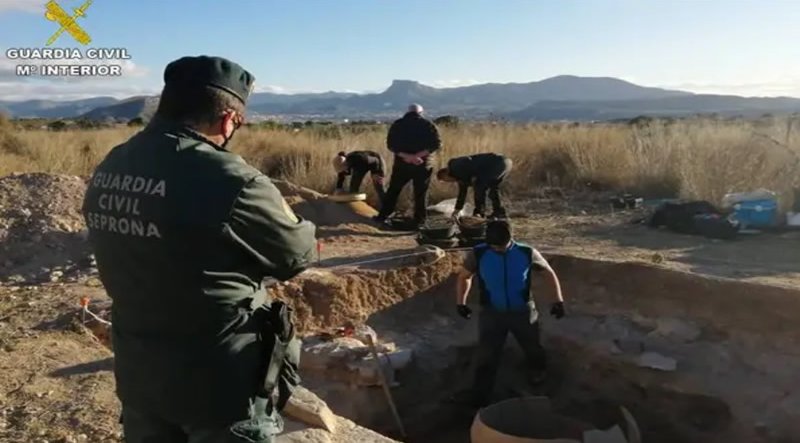 An artifact dug up in the province of Alicante earlier this month, according to the first hypotheses of the Department of Heritage of Monover, and the Provincial Archaeological Museum of Alicante (MARQ), could actually date back to the Middle Ages.
Archaeological work has been going on under the watchful eye of the Guardia Civil for the last few weeks, to try and learn more about the medieval origins of Monover. The ceramic piece was deposited in the appropriate premises on December 8 for its restoration, and for a more exhaustive study to be carried out.
This discovery was made after a citizen went to the Nature Protection Service (Seprona) of the Monover Guardia Civil last July. They explained that while carrying out agricultural tasks on his plot, he had found a large, half-buried clay pot.
Seprona officers accompanied the man back to his farm, in the Xinorla area of ​​the municipality of Monover. Suspecting that it could be a piece of great archaeological interest, the officers brought it to the attention of the Territorial Directorate of the Department of Education, Culture, and Sports of Alicante.
They subsequently contacted the Department of Heritage of the City of Monover, in order to coordinate a way of recovering the remains. Between December 4 and 8, the piece was carefully extracted from the field, with Guardia Civil officers intensifying their vigilance, to prevent any possible looting.
Incredibly, the vessel was removed almost intact, and was estimated to be a vessel with a capacity of 325 litres. Experts have initially dated the artifact to be from between the end of the 14th century, and the beginning of the 15th century.
It is believed the piece could have been manufactured in one of the many pottery workshops that surrounded the city of Valencia in medieval times, and will now be placed on display, as reported by larazon.es.