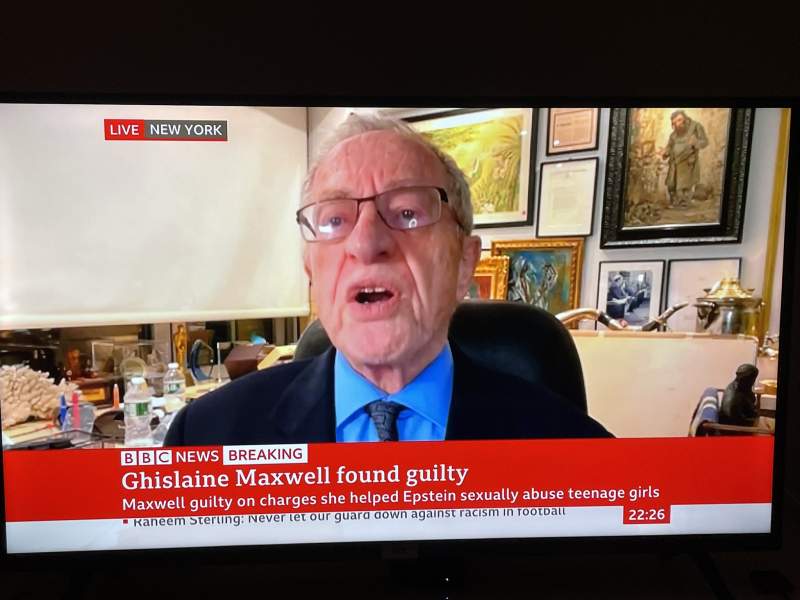 THE BBC has been forced to apologise for interviewing Alan Dershowitz, a man accused alongside Prince Andrew in the Jeffrey Epstein “sex slave” case, following the Ghislaine Maxwell trial verdict on December 29.

In a statement released on Thursday, December 30, the British Broadcasting Corporation said: “Last night’s interview with Alan Dershowitz after the Ghislaine Maxwell verdict did not meet the BBC’s editorial standards, as Mr Dershowitz was not a suitable person to interview as an impartial analyst, and we did not make the relevant background clear to our audience. We will look into how this happened.”

Mr Dershowitz was interviewed by the BBC News Channel despite representing Epstein and being accused alongside Prince Andrew of sex assault by Virginia Giuffre in the Epstein “sex slave” case.

Many people on social media reacted angrily to seeing Mr Dershowitz on the screen, who the broadcaster simply described as a “constitutional lawyer” and today’s apology from the network comes after it was accused of a lack of transparency and noticeable conflict of interest.

Epstein accuser Virginia Giuffre directly named Dershowitz as one of the men Epstein and Maxwell allegedly forced her to have sex with repeatedly when she was underage – allegations the 83-year-old continues to deny.

Using the platform allowed by the BBC after the guilty verdict given to Maxwell, the American lawyer said: “I think the most important thing, particularly for British viewers, is that the government was very careful who it used as witnesses,” Dershowitz said, alluding to his connection to the case, even though BBC did not. “It did not use as a witness the woman who accused Prince Andrew, accused me, accused many other people because the government didn’t believe she was telling the truth.”

38-year-old Giuffre, one of Jeffrey Epstein’s alleged “sex slaves”, claims that Prince Andrew and other high-profile men (including Dershowitz) forcibly had sex with her when she was 17 at Epstein’s New York mansion and in the London home of Ghislaine Maxwell.