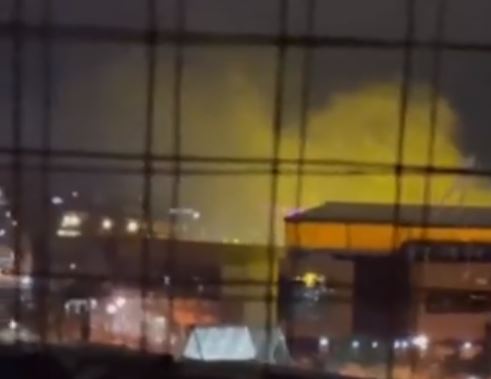 Early morning blaze hits Wolves Molineux stadium.
The historic Molineux stadium was hit by fire at around 1:40am on Sunday morning, January 23. Firefighters and police were quickly called to the stadium as smoke poured out into the air.
20 firefighters were on the scene battling the fire for several hours before it was contained. The fire had broken out in a bar area in the Sir Jack Hayward stand. According to reports, nobody was injured as the blaze hit.
People were asked to leave the area via the stadium’s PA system. Local residents watched on as the fire unfolded. The building’s fire alarm system was in full blast.
Wolverhampton fire station watch manager Andy Howard revealed details of the fire. He commented: “There’s been a fire in the bar area, in the kitchen.
“It was contained to the room of origin but the bar area and part of the workspace was involved in fire. Otherwise it was just smoke damage to the rest of the floor.”
A spokesperson for the West Midlands Fire service confirmed that the fire brigade was called in shortly before 2am. Firefighters were on scene at the Wolves stadium within five minutes.
On Sunday morning, shortly before 7am firefighters left the scene. A smaller group of firefighters though is due to check back in at some point on Sunday to ensure everything is safe.
Local residents had recorded the blaze and took to social media to share images.