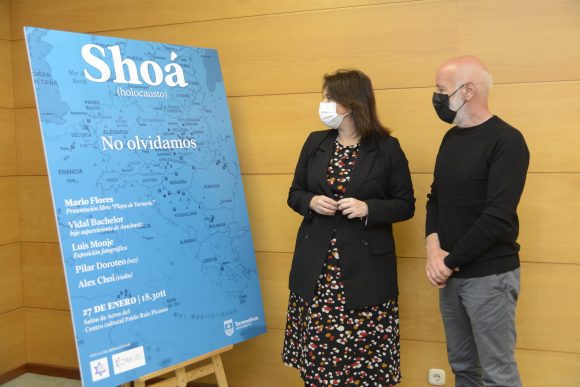 Torremolinos is set to commemorate the Holocaust on January 27, with literary, photographic and musical activities as part of an important cultural event.
The mayor of Torremolinos, Margarita del Cid, stated that the City Council has organised a huge cultural event with literary, photographic and musical activities to be carried out for International Holocaust Remembrance Day on January 27. There will also be a floral offering made in remembrance of all the groups and communities who suffered the Shoah.
“It is very important for local administration to promote this type of acts and commemorations because we must never forget,” said del Cid. She referred to the growing tension between NATO and Russia regarding Ukraine: “the ghost of war is here again, which is why we need to continue remembering the brutal acts that were committed, in this case, during the Second World War”.
She reminded listeners that “then, millions and millions of people were murdered and deported, especially from the Jewish community, who were the main victims of the Nazi regime, but also from other minorities such as homosexuals, gypsies or physically or mentally disabled people”. She then stated that all representatives of such groups in Torremolinos would be invited to participate in the event.
The main event will take place on Thursday, January 27 from 6:30 p.m. at the Pablo Ruiz Picasso Cultural Centre, where there will be a series of “well-prepared activities”.
The act will begin with a talk from Mario Flores, the author of the book La Playa de Varsovia (“The Beach of Warsaw”) who has a special connection to the coast of Malaga and Torremolinos.
Flores will be followed by Vidal Bachelor, a doctor from a family of gypsies and the son of an Auschwitz survivor. He will share his direct experience as the son of a victim.
Bachelor’s story will be followed by a photographic exhibition by Luis Monje, “who has visited different concentration camps in order to create a shocking first-hand visual testimony”.
Lastly, the duo “Canto de Violín” will perform a series of musical pieces in homage to the victims on a stage where six candles will be lit in honour of the six million victims of the Holocaust. Before this act, at 1:00 p.m., an offering of flowers will be made at the Avner Shalev roundabout.
________________________________________________________________________
Thank you for taking the time to read this article, do remember to come back and check The Euro Weekly News website for all your up-to-date local and international news stories and remember, you can also follow us on Facebook and Instagram.