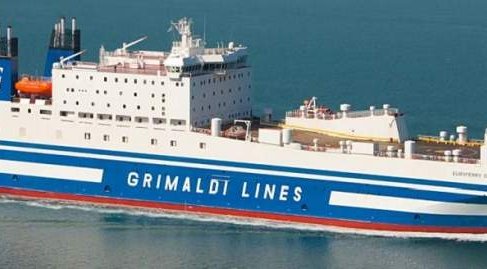 Authorities have said that 11 of the 288 people on board the ferry that burst into fire on Friday morning were still missing.
The fire broke out on the Euroferry Olympia near the Greek island of Corfu on the Italian owned vessel at 4:12 local time on Friday. The vessel, which belongs to ferry operator Grimaldi, was sailing through the Ionian Sea en route to the Italian port of Brindisi with 288 people on board.
The Greek coastguard initially said that 278 people had been rescued, including one person who was not on the official passenger list.
Two foreign passengers were later found and transported to hospital by helicopter, while 11 people were still missing.
A 42-year-old crew member was also injured and has been transferred to nearby Corfu by a coastguard patrol boat “as a precaution”, the Director of the Corfu hospital, Leonidas Roumbatis, has confirmed.
A man was seen walking with difficulty as he was supported by firefighters in ERT footage. On arrival at the port of Corfu authorities were told he was suffering from breathing problems.
Secretary of State for the Merchant Navy Kostas Katsafados had earlier told Greek radio station Skai that all passengers were safe and on rescue boats.
According to the Greek coastguard the ferry was assisted by two tug boats, five other boats including one from the Italian Police and two private fishing vessels, as well as three helicopters.


The cause of the fire is not yet known and an investigation has begun with one passenger saying telling ERT that: “were sleeping when we were alerted that there was a fire.
“We got dressed in a second and went on deck where we were given life jackets.
“On the bridge, it was panic, there was a lot of smoke coming out of the garage, the atmosphere was suffocating.”
A statement from Grimaldi said that the ferry’s captain immediately asked the passengers to leave the boat, while patrol boats, coastguard tugs and firefighters were dispatched from Corfu. They went on to say that the ship was also carrying 153 commercial vehicles (trucks and trailers), as well as 32 passenger vehicles.
The statement finishes saying: “No fuel spill has been detected at sea, nor does the stability of the ship appear to be compromised,” it said, adding that “tugboats have been hired and are heading towards the Euroferry Olympia to give prompt support and manage the emergency.
“The top management of the Grimaldi Group expresses its regret for the incident and will fully cooperate with the competent authorities to shed light on the incident”.
The company has confirmed that the coast guard continue to look for the eleven people that are still missing.