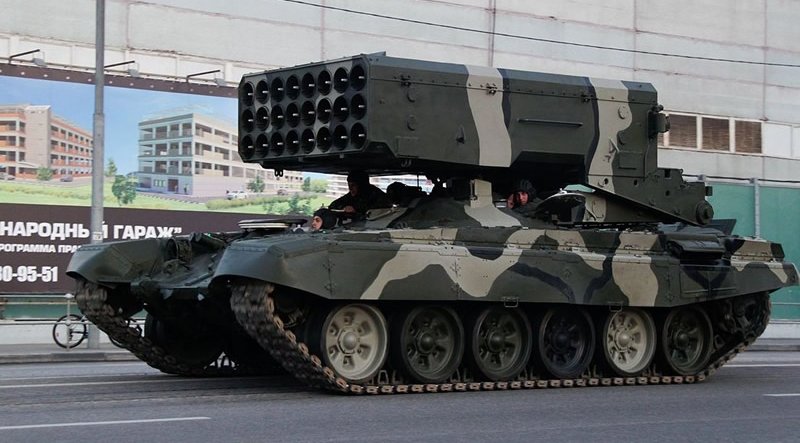 Acclaimed CNN correspondent Frederik Pleitgen, this morning tweeted footage of a Russian TOS-1 multi-barrelled rocket launcher mounted on the chassis of a T-72 tank, being deployed near the Ukrainian border.

This weapon is capable of firing thermobaric missiles, and is one of the most destructive and frightening weapons in the Russian arsenal. They have the ability to unleash a wall of fire that absorbs oxygen from the enclosed space and kills the occupants of the targets hit by the expansion wave, or by suffocation.

Pleitgen said the video he shared on social media was captured in southern Belgorod, which is a few tens of kilometres from the Ukrainian city of Kharkiv. The fundamental feature of this weapon is the volumetric burst ammunition, which releases an aerosol cloud onto its target by burning atmospheric oxygen.

As Maria Alexandrova writes in Russia Beyond, it is especially effective in destroying the enemy in shelters (the walls of a bunker are not an obstacle for the spray) and in the mountains, where the blast waves intensify after being reflected by the rocks.

TOS-1 was first used during the Soviet war in Afghanistan, then it was later deployed in Chechnya, and the Syrian civil war. In 2003, the then US Secretary of Defense, Donald Rumsfeld, confirmed in a speech before Congress that the US used thermobaric Hellfire missiles during the Iraq war.

According to The Guardian, this deadly flamethrower can deliver two types of warheads: incendiary, or fuel-air explosives. The latter, also called vacuum or thermobaric rockets, work by using oxygen from the surrounding air to generate a high-temperature explosion.

As reported by the Insider news portal, the weapon system is extremely effective against entrenched enemies, and also to knock down buildings and bunkers.

They are much more destructive than conventional explosives since they have the ability to generate a massive heat and pressure effect with great precision, at a single point, guaranteeing the complete elimination of the target.

Other military experts say that thermobaric weapons can vaporise human bodies, and crush internal organs, as reported by larazon.es.

The russian army has deployed the TOS-1 heavy flamethrower which shoots thermobaric rockets, the was South of Belgorod.- Frederik Pleitgen @fpleitgenCNN pic.twitter.com/aOuBqTwo0f