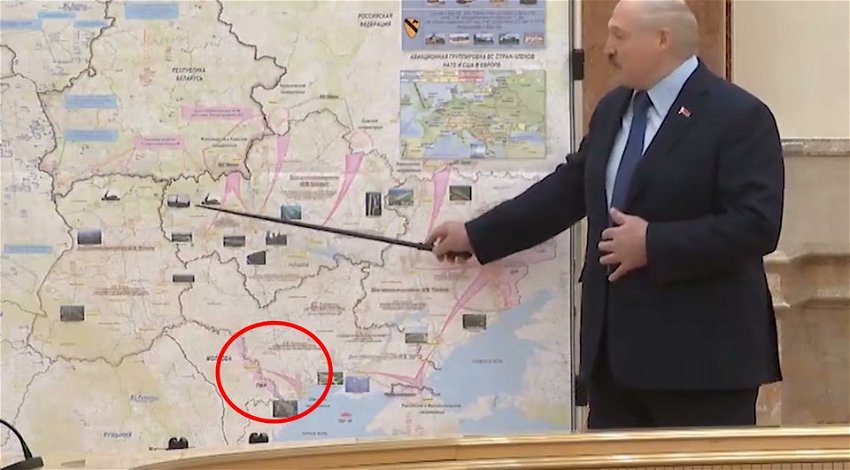 BELARUS President Alexander Lukashenko “mistakenly” broadcast a possible Russian invasion of Moldova during a speech to his security council on Tuesday, March 1. The address was televised and posted online and since then, the video has circulated on social media platforms with people questioning whether it was a deliberate misdirect attempt or whether the plans are indeed real.

Lukashenko, self-proclaimed “last dictator” in Europe and wartime ally of Russian President Vladimir Putin, stood in front of a battle command map that appeared to show a planned attack from southern Ukraine into Moldova, a former Soviet republic bordering Ukraine and Romania.

The blatant invasion map divided Ukraine into four sections, where the attack lines it highlighted had already been executed by Russia, except for what appeared to be a planned attack on the breakaway state of Transnistria in Moldova via the Ukrainian port city of Odessa, noted Belarusian journalist Tadeusz Giczan.

A zoomed-in map of the US and Canada also appeared oddly in the huge Eastern Europe graphic, but nothing stood out in the North American section, as reported by La Opinion.

Someone please tell me what's happening with #Moldova on #Belarus President #Lukashenko's map during his security council meeting? Doesn't he know how to use PowerPoint? #UkraineRussiaWar #Ukraine #Putin #Zelensky pic.twitter.com/wfjfSQym6I

Lukashenko’s war map comes after Belarus Armed Forces joined Russia in the attack on Ukraine after entering the country from the Chernihiv region, according to a tweet from the Ukrainian parliament on March 1.

“Belarusian troops entered Chernihiv region,” the brief statement read. “The information was confirmed to the Public by Vitaliy Kyrylov, spokesman for the North Territorial Defense Forces.”

This claim was backed up by Latvian Defence Minister, Dr Atis Pabriks, who claimed that Belarusian troops had been seen crossing the border into Ukraine, as reported by the Mirror at the time.

Pabriks told the Commons Foreign Affairs Committee: “This basically means we have two aggressors at this moment officially.

“I am very much concerned that Russian troops, following orders from the top, will go into the mode similar to that President Assad was using against his population.”