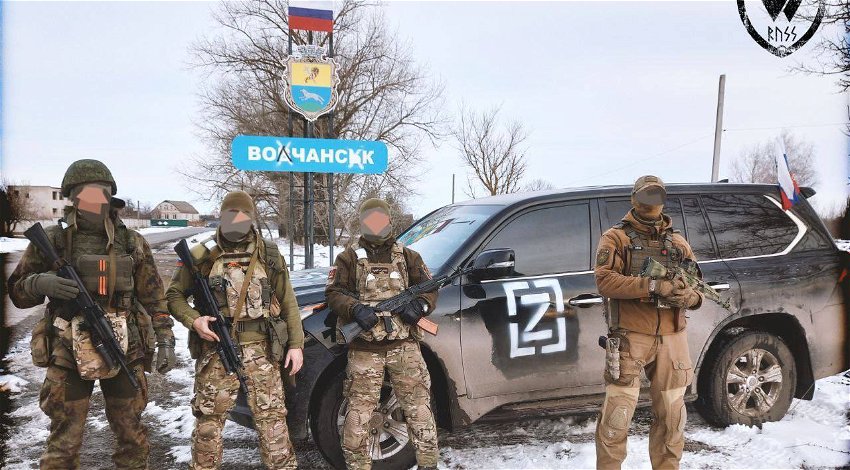 Fighters for Rusich, a force affiliated with the Kremlin-backed Wagner Group, were photographed near the Russian-Ukrainian border on Wednesday, crossing into the Kharkiv region in Z-marked vehicles.

The mercenaries were reported to have crossed from Russia to the village of Pletenivka, where Ukrainian defence officials expect a renewed assault by Russian forces in the coming days, the Times reports today, Thursday, April 7.

Rusich, founded in St Petersburg in 2014 by Aleksei Milchakov and Yan Petrovsky, is thought to consist of a few hundred mercenaries whose insignia is the valknut, an old Norse symbol used by white supremacists.

Milchakov, 30, who trained as a paratrooper in the Russian army, has posted pictures that show him removing the ears of dead Ukrainian soldiers in Donbas and carving the kolovrat, a swastika used by far right Slavs, into their foreheads.

Milchakov boasted of these exploits in a 2020 interview in which he freely admitted to being a neo-Nazi and said he “got high from the smell of burning human flesh”.

Fighters for Rusich is affiliated with the Kremlin-backed Wagner Group.

British military intelligence says 1,000 mercenaries from the private military Wagner Group, are being deployed to eastern Ukraine, the BBC reports.

The group has been active over the past eight years in Ukraine, Syria and African countries, and has repeatedly been accused of war crimes and human rights abuses.

Tracey German, professor of conflict and security at King’s College London, told the BBC that “Running a mercenary army is against the Russian constitution.”

“However, Wagner provides the government with a force which is deniable. Wagner can get involved abroad and the Kremlin can say: ‘It has nothing to do with us’.”