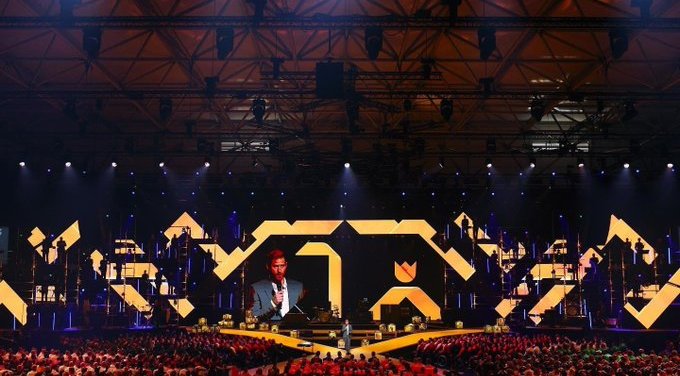 Opening the Invictus Games in the Netherlands on Saturday April 16th, Prince Harry singles out the Ukrainian competitors and their supporters for their heroism.

The Ukrainian team who had left the war torn country to compete received a standing ovation when the prince paid tribute, the games being all about war veterans who have been wounded and injured.

Competitors cheered for nearly a full minute at the start of the ceremony after the Dutch Prime Minister Mark Rutte welcomed them to the event that was delayed for two years by the coronavirus pandemic. Waving their flags in response, the Ukrainians received an even louder response from those attending.

Prince Harry, who met the Ukrainian team the day before, said: “Your bravery in choosing to come and for being here tonight cannot be overstated.

“You know, we stand with you. The world is united with you. And still you deserve more. And my hope is that these events, this event, creates the opportunity … of how we as a global community can better show up for you.”

It was left to Meghan Markle to introduce Prince Harry who she described as “the founder of the games” adding that “I know that all of you feel the same, because he is your fellow veteran, having served two tours of duty in Afghanistan and 10 years of military service.”

Rutte in his address spoke of the “resilience of fortitude in the face of adversity, of vulnerability and strength” of the competitors.

He said: “These are your stories, your lifelines, and the events unfolding now in Ukraine make them resonate even more. I’d like to extend a special welcome to the Ukrainian team.”

Attending the games are over 500 competitors from 20 different countries with the Ukrainian competitors coming off active duty to attend. The games which close on April 22 kicked off with a driving challenge around an automotive obstacle course.

Harry got taken around the course by one of the competitors experiencing the race first hand while he and Meghan were later driven around in miniature Land Rover cars by children.

In a week where Prince Harry tried to mend relationships he received a rapturous welcome as he singles out Ukrainian heroism at opening of Invictus Games.