Putin ‘believes he is winning’, despite losing an eighth general in Ukraine 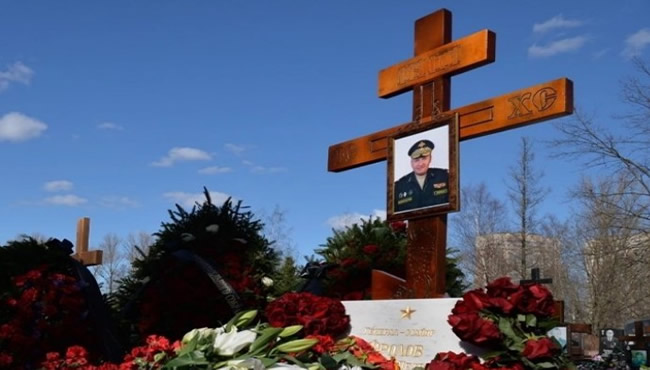 Vladimir Putin loses his eighth general in Ukraine but still ‘believes he is winning’, according to Austrian Chancellor

A burial service took place on Saturday, April 16, in the Russian city of St Petersburg. It was held in memory of Major General Vladimir Frolov. He becomes the eighth of Vladimir Putin’s top-ranking officers to be killed since the conflict began in Ukraine.

A statement released by Russian Governor Alexander Beglov announced that Frolov had ‘died a heroic death in battle’, but omitted to say where or how he was killed. Beglov had been involved in the bombardment of the city of Mariupol, as deputy commander of the 8th Army.

Photographs displayed on the websites of Russian news outlets last Saturday showed red and white flowers piled high on top of a grave at a St Petersburg cemetery.

According to Karl Nehammer, the Austrian Chancellor, despite the loss of so many of his generals, Putin is still convinced that he is winning the war. Last Wednesday 13, Mr Nehammer became the first EU leader to go to Moscow and meet with the Russian President face-to-face.

Speaking this Saturday 16 on NBC‘s ‘Meet The Press’, the Austrian claimed that during their meeting in the Kremlin, his dialogue with Putin was ‘frank and tough’.

‘I think he is now in his own war logic. He thinks the war is necessary for security guarantees for the Russian Federation. He doesn’t trust the international community. He blames Ukrainians for genocide in the Donbas region’, Nehammer commented. Adding his belief that Putin really thinks he is winning the war.

Previously, 48-year-old Lt Gen Yakov Rezantsev had been the last Russian general to be killed in Ukraine. He is believed to have perished in the southern city of Kherson during an airstrike. A tank battalion commander, Colonel Miras Bashakov was also confirmed as being killed recently, as reported by metro.co.uk.