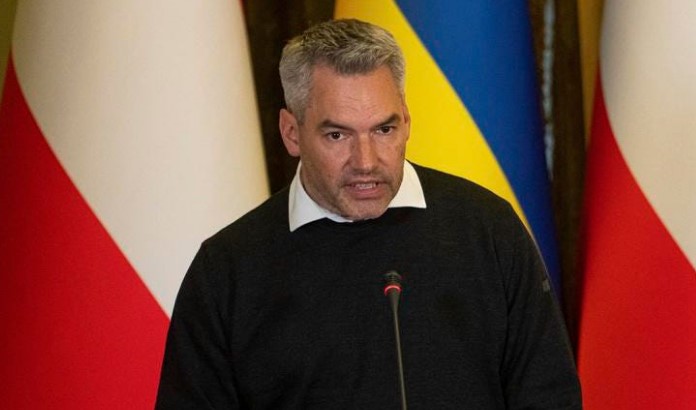 Karl Nehammer, the Austrian Chancellor, this Monday, April 11, became the first European leader to visit Vladimir Putin since the invasion of Ukraine began. He travelled to Moscow from Kyiv, hoping to conduct face-to-face talks with the Russian President.

Having declared itself permanently neutral in 1955, Austria is not a member of NATO, but Nehammer said that his objective in going in person to the Kremlin was to try and act as a “bridge-builder” between Moscow and Kyiv.

Speaking in Kyiv last Saturday 9, at a joint press conference with Ukrainian President Volodymyr Zelenskyy, the chancellor assured that he would “do everything possible to make the war stop, and to ensure that steps are taken in the direction of peace”.

“We are militarily neutral, but there are exceptions to neutrality. We are not neutral when it comes to naming crimes and discussing them”, he added.

As a neutral nation, Austria has not sent military aid to Ukraine, instead, it has provided the civilian population with helmets and body armour, along with humanitarian aid. During his visit to Ukraine, the Conservative politician was given a tour of Bucha, the town alleged to have been the location of Russian war crimes.

It is hoped that Nehammer will raise the subject with Putin of the suspected atrocities that Russian troops have carried out in the former Soviet territory. He previously stated that he wanted to show his support for Zelenskyy, after being moved by their conversations.

“It is necessary that the UN investigates these violations, that international justice begins its work”, the chancellor said last Saturday. Adding, “It is well known that the wheels of international prosecution turn slowly, but they turn continuously, and with persistence, and that is what is happening at the moment”.

His proposed visit to Moscow drew criticism from some quarters of the German media. Deputy mayor of the destroyed Ukrainian city of Mariupol, Sergei Orlov, during a TV broadcast, told the German outlet Bild, “The war crimes that Russia is committing right now on Ukrainian soil are still taking place”.

“I don’t understand how a conversation can be held with Putin at this time, how business can be conducted with him”, as reported by euronews.com.

UPDATE: Following his meeting in Moscow, Nehammer told the press that it was “not a friendly visit”, and was “very tough”, open and direct. He claimed that the new Russian offensive in Ukraine’s Donbas region was “evidently being prepared on a massive scale”, as reported by [email protected]