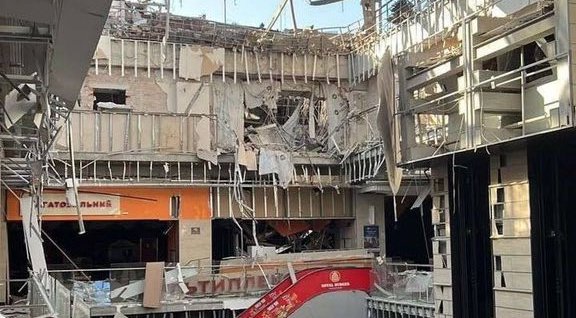 UPDATE 11.50 am (May 25) – “Russian troops have destroyed the workshops of the Motor Sich enterprise in Zaporizhzhia with high-precision long-range air and sea-based missiles,” Konashenkov said at a briefing on Wednesday, May 24.

This is contrary to reports from Ukraine, whose Zaporizhzhia regional military administration said three of four missiles struck the Shevchenkivskyi district and a shopping centre in the Oleksandrivskyi district. While Ukrainian troops reportedly shot the other missiles out of the air.

“High-precision long-range air and sea-based missiles in the city of Zaporizhzhia destroyed the production workshops of the Motor Sich plant, which produced aircraft engines for combat aviation of the Ukrainian air forces, including unmanned aerial vehicles,” Mr Konashenkov said.

“The logistics centre of the 72nd motorised infantry brigade, two fuel bases, two air defence radar posts and 16 areas of concentration of manpower and military equipment of the Armed Forces of Ukraine were also hit.”

It added: “The Russian air defence forces in the Mykolaiv region also shot down a Mi-8 helicopter of the Ukrainian Air Force.”

This isn’t the first time a strike was reported on the Motor Sich production plant in Zaporizhzhia.

However, it transpired that Ukrainian reports that explosions were heard near Zaporizhzhia, Europe’s largest nuclear power plant, turned out to be true.

ORIGINAL 8.14 am (May 25) – Russian forces fired four missiles at the city of Zaporizhzhia, one of which was destroyed by Ukrainian air defence systems. One person was killed, and three more were injured in the attack, according to early reports.

According to the Zaporizhzhia regional military administration, the missile attack was launched at around 5.13 am and destroyed 62 buildings.

Although one was shot down, the other three attacked two districts of the city – the Shevchenkivskyi district and a shopping centre in the Oleksandrivskyi district.

“It is currently known that one citizen was killed and three were injured,” the regional administration said on the Telegram messaging app.

The news of the attacks comes after a Russian Su-25 Grach aircraft was reportedly shot down in Zaporizhzhia Region on Monday, May 23.

Ukraine’s National Guard serviceman said that while completing a combat mission, they destroyed the Russian aircraft.