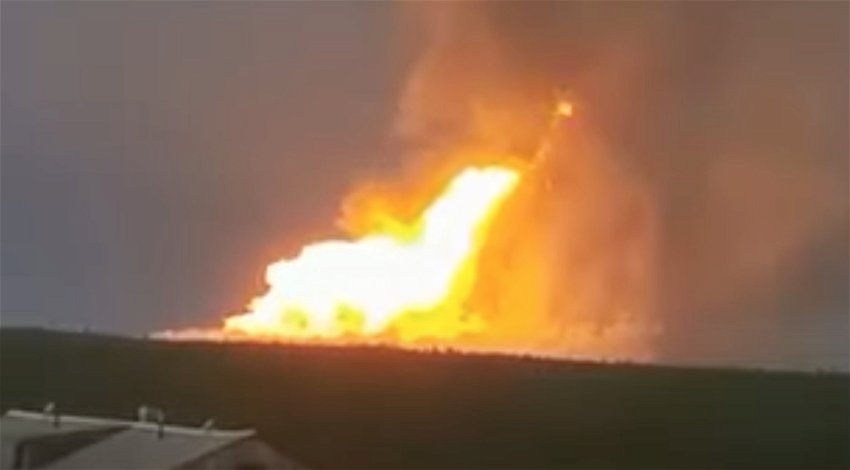 MORE information has emerged regarding the huge fire that broke out at Urengoy, Russia’s largest gas field, located in the Yamalo-Nenets region.

UPDATE 1 pm (June 16) – Following an explosion at Russia’s Urengoy gas field in the Yamalo-Nenets region in the early hours of Thursday, June 16, further information has emerged as to the cause of the blast.

“On June 16, 2022, at 0:30 am (Moscow time), a depressurisation occurred at the Urengoy field with a fire in the second line of the gas collector located between the integrated gas treatment units UKPG-7 and UKPG-8V. There were no casualties,” Gazprom Dobycha Urengoy said.

It added: “The incident did not affect the fulfilment of the gas production targets.”

As previously noted, the Urengoy gas field in the Yamalo-Nenets region is the world’s second-largest natural gas field behind the South Pars/North Dome field located in the Persian Gulf.

Overnight, the Gazprom Dobycha Urengoy section of Russia’s largest gas field erupted after a 1400 mm pipe is said to have mysteriously ruptured between the 7-8 gas fields, according to local reports.

In August last year, due to a large-scale fire at the gas chemical complex of Gazprom in Novy Urengoy, gas supplies through the Yamal-Europe gas pipeline were reduced. This then caused a rise in prices in the European market by 6 per cent, according to an Interfax report.

On Monday, May 30, Russian gas supplier Gazprom announced the cutting of all supplies of natural gas to the Netherlands, this followed similar threats to other countries who refused to pay for their gas in rubles.

One more video of fire pic.twitter.com/DAM3MsmSwQ

The blaze at the Urengoy gas field is the second unexplained fire to have broken out in Russia this week.

On Tuesday, June 14, a fire broke out at a paint and varnish plant in Odintsovo, located in the western suburbs of Moscow, Russia.

Then prior to that, the Zagorsk Optical-Mechanical Plant in Russia, which produces Russian military equipment and is located about 80 minutes north of the Kremlin, caught on fire on Thursday, June 9.