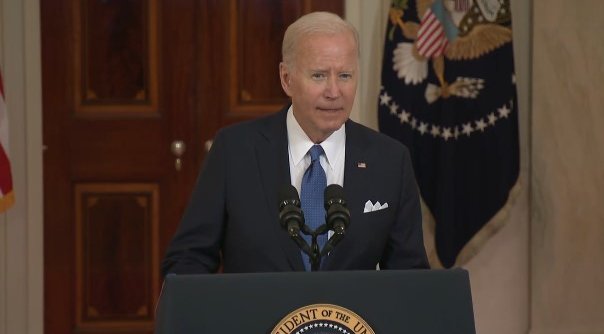 In response to the US Supreme Court’s decision earlier today, Friday, June 24, to overturn the 1973 Roe vs Wade ruling on abortion, President Joe Biden has called it a ‘tragic error’. The President blamed the outcome on former president Donald Trump.

“Make no mistake, this decision is a culmination of a deliberate effort over decades to upset the balance of our law”, he said. “The court has done what it has never done before, expressly take away a constitutional right… that had already been recognised”.

Speaking from the White House, he continued: “It was three justices named by one president, Donald Trump, who were the core of today’s decision to upend the scales of justice and eliminate a fundamental right for women in this country”.

The US Supreme Court consists of nine Justices. When Trump became President it was deadlocked with four liberals and four conservatives. He appointed three members over three years, leaving the Court with a 6-3 conservative majority.

Trump, in return, commented that he believed today’s decision ‘will work out for everybody’ and gave the credit to ‘God’, according to metro.co.uk.

A landmark decision was made today, Friday, June 24, in the United States, as the Supreme Court overturned the historic Roe vs Wade decision from January 22, 1973. Today’s ruling, in a 6-3 vote, came in the Dobbs vs Jackson Women’s Health Organisation case, and effectively allows most abortions to be banned after 15 weeks of pregnancy in the state of Mississippi.

In 1973, the ruling in the Roe v Wade case paved the way for abortions to be legalised nationwide. This decision today by SCOTUS (Supreme Court of the United States) really came as no surprise though.

A draft opinion written by Justice Samuel Alito had already been leaked and published by Politico back in May, so today’s result  Alito today reaffirmed his belief that the 1992 decision in the Roe and Planned Parenthood vs Casey abortion case should be overturned because it was wrong.

In his final opinion, Alito wrote: “The Constitution makes no reference to abortion, and no such right is implicitly protected by constitutional provision. Roe was egregiously wrong from the start. Its reasoning was exceptionally weak, and the decision has had damaging consequences. And far from bringing about a national settlement of the abortion issue, Roe and Casey have enflamed debate and deepened division”.

Three conservative judges were involved in today’s decision to overturn the Roe ruling, all of whom were originally appointed by former President Donald Trump, and voted in favour. The ruling does not ban abortion, but it will allow each individual state to determine how to regulate this issue.

“With sorrow – for this Court, but more, for the many millions of American women who have today lost a fundamental constitutional protection – we dissent’, wrote Stephen Breyer, Sonia Sotomayor and Elena Kagan, the three justices who voted against the ruling.

Breyer said: “After today, young women will come of age with fewer rights than their mothers and grandmothers had. The majority accomplishes that result without so much as considering how women have relied on the right to choose or what it means to take that right away”.

President Joe Biden, in response to the leaked document in May, said in a statement at the time: “Roe has been the law of the land for almost 50 years, and basic fairness and the stability of our law demand that it not be overturned”, calling it a ‘fundamental right’ for a woman to be able to choose.