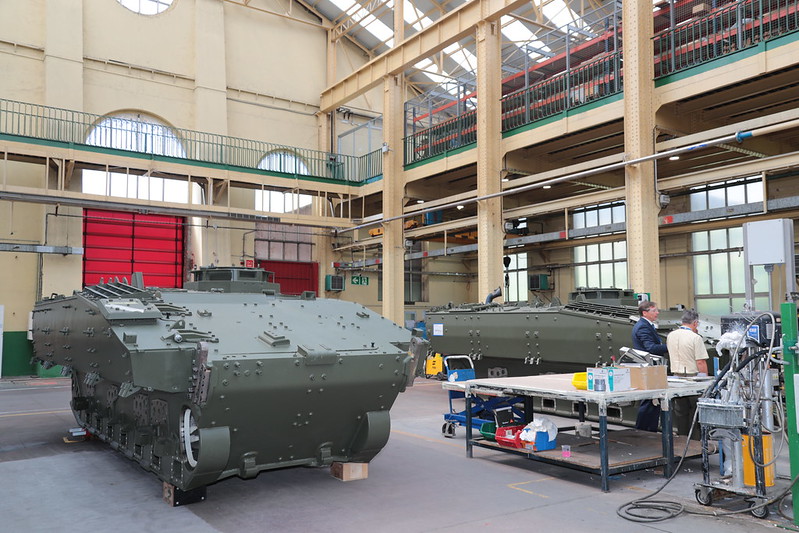 SPAIN’S Minister of Defence, Margarita Robles, said that the production of the VCR 8×8 ‘Dragon’ wheeled combat vehicle will help to ‘transform the Spanish Army’.

Production of the VCR 8×8 ‘Dragon’ wheeled combat vehicle is in progress at the Trubia Weapons Factory in Asturias and is set to revamp the Spanish Army.

The production of the military vehicle, which is being carried out at the headquarters of the GDELS-Santa Bárbara Sistemas factory, is already in the first stages of production.

“This is an essential project for the Army, and therefore for the Armed Forces,” said Robles at the production plant on Friday, September 9.

The VCR 8×8 Dragon will “contribute to the transformation of the Spanish Army so that it can respond to the demanding and complex security environment of the 21st century.”

The contract for “manufacturing supply of 8×8 wheeled combat vehicles” was signed between the Ministry of Defence and TESS Defence S.A., a company formed by Indra Sistemas, S.A., Santa Bárbara Sistemas, S.A., Sapa Operaciones and ESCRIBANO EM&E in 2020.

Santa Bárbara Sistemas’ General Manager, Juan Escriña, said: “The VCR 8×8 Dragon is a very exciting project because it provides a very significant technological transformation and knowledge, which will help us to face the challenges we face in the future.

“We are proud to be able to work for our Armed Forces and, in particular, our Army and protect our soldiers.”

Senior Director of Operations of Santa Bárbara Sistemas, Beatriz Gómez, said: “The factory’s occupancy capacity is around 65 per cent of what it could handle, which is allowing us to work with four contracts at the same time.”

The contract for the first production phase of the VCR 8×8 programme comprises the delivery of 348 vehicles, with the full number of contracted units expected to be completed in 2027.

The first of the seven VCR 8×8 vehicles, to be delivered in 2022, will soon roll off the production line.

Robles said: “This entirely Spanish development provides the national industry with technological sovereignty over a strategic system that represents a priority factor in the defence sector with a view to its projection, both internally and externally, promoting the development of its own technological industries.”