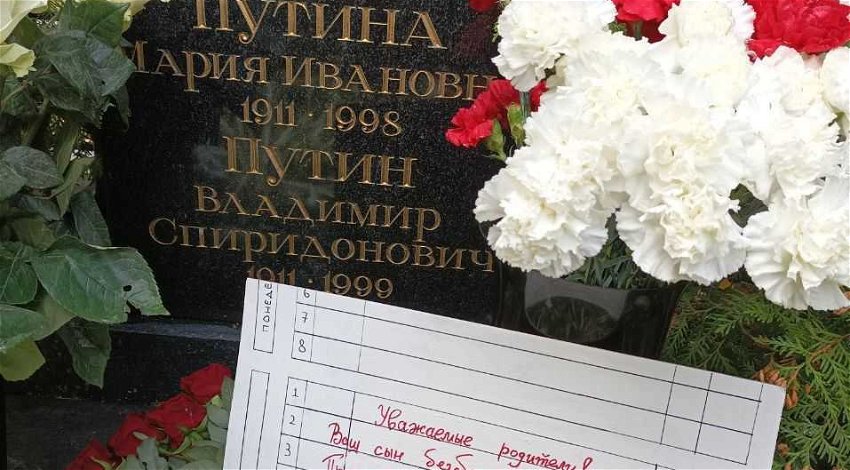 The Party of the Dead, a group of activists, left a message on the grave of Russian President Vladimir Putin’s parents, as reported on Tuesday, September 27.

The message on the grave of Putin’s parents in Russia’s St Petersburg read:

“Dear parents! Your son is behaving badly! He skips history lessons, fights with his classmates and threatens to blow up the whole school. Take action,” the note said.

On their official telegram channel The Party of the Dead stated:

“This morning, an unidentified group of people approached the parents of a boy demanding educational measures be taken against their son. the appeal was left at the seraphim cemetery in Petersburg.”

“(We hope the parents of this f****t will someday take him back to themselves).”

“ps: this is an action of feminist anti-war resistance”

The Party of the Dead calls itself the biggest party in the world.

“The Party of the Dead is made up of all the dead, all the living are future members of the party,” the movement’s “charter” says.

However, it adheres to anti-war principles and does not recommend that Russians rush to join the party because of the mobilisation announced in Russia.

“Dear deadbeats. Don’t go to the military registration and enlistment offices – you will be eaten there and asked for more.”

“Do not give in to the call of the so-called “motherland” (to that gurgling zov… of the president), leave, take cover, evade (from taking part in the shameful invading war),” the party said in an appeal to its supporters of September 26.

” Don’t go to work where you can be taken away (the dead don’t work), don’t visit museums and theatres: institutions of so-called “culture” have turned from quiet columbariums into corpse recruiting stations, don’t join this s*** – even, as they assure you, “partially”. Save the planet. Organise, fight back!”

The news comes after the first results of referendum voting at polling stations in Russia on joining the Russian Federation, have been published, as reported on Tuesday, September 27.