WATCH: Another of UK’s ‘most wanted’ criminals arrested in Marbella on Costa del Sol 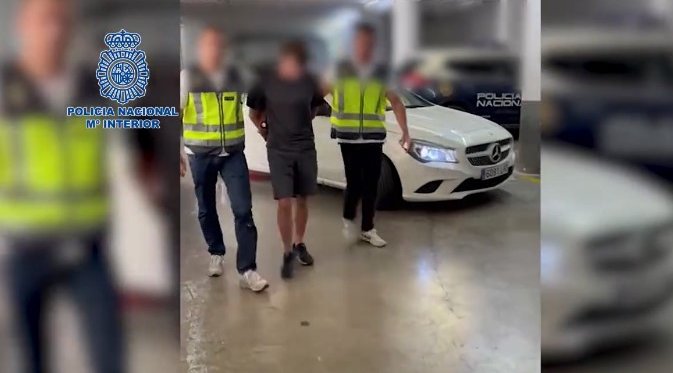 A 30-year-old British fugitive arrested in the Malaga city of Marbella was on the UK’s list of ‘most-wanted’ criminals.

As reported in a statement by the National Police today, Tuesday, October 25, the force has arrested another of the UK’s ‘most wanted’ criminals. Dean Garforth was detained in the Costa del Sol city of Marbella.

An International Arrest Order had been issued in his name by the British authorities for the crimes of drug and arms trafficking. According to the British National Crime Agency ( NCA ), the 30-year -old Brit is linked to a powerful organisation dedicated to supplying significant quantities of cocaine and marijuana in the northwest of England.

According to the General Directorate of the Police, the criminal had established his residence in a Marbella urbanisation popular with British citizens, where he could blend in with others of his same nationality.

A surveillance operation verified that Garforth went to great lengths to hide his identity. “He was located when he was leaving his home with sunglasses and a cap on board an electric bicycle”. explained the National Police.

At the time of being identified, the fugitive allegedly rammed his vehicle into one of the officers and ended up injuring two police officers, leaving them with minor injuries. In addition to being arrested for the crimes attributed to him in his country, the fugitive was also arrested for a crime of resistance and disobedience.

He has already been placed at the disposal of the Central Court of Instruction No5 of the National High Court, as reported by laopiniondemalaga.es.

His arrest came as part of Operation Most Wanted, a joint initiative between the British NCA and the NGO Crimestoppers. It was launched back in 2006 to identify fugitives wanted by the UK police for serious crimes such as drug trafficking, murder, robbery and arms trafficking, who are suspected of hiding out in Spain.