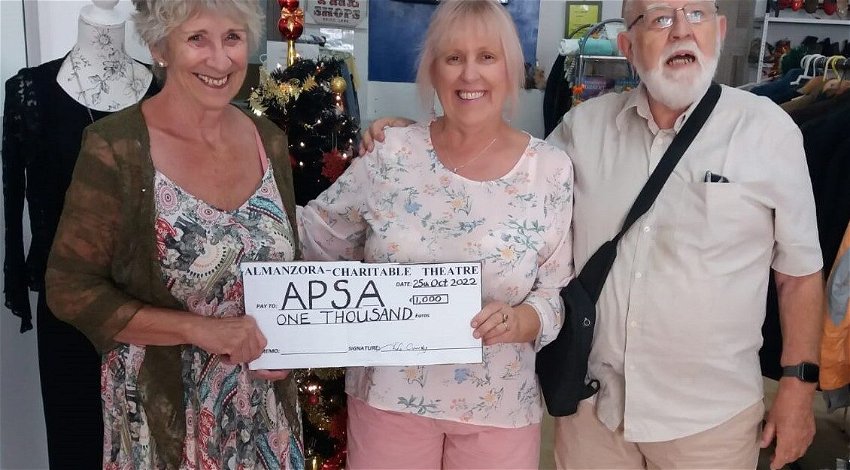 FATHER CHRISTMAS came early this year to the APSA charity shop in Albox.

Both APSA’s president, Terry Le Gassick, and secretary, Sally Miller, were active members of ACT and shared the stage in many of their productions.

Lorraine also volunteered at the APSA Charity shop for many years.

“We are deeply thankful for the generosity and kindness shown by these stalwarts of amateur theatre in the Albox area,” Sally said as she accepted the cheque on behalf of APSA.

With APSA’s kennels full to capacity, the donation will go a long way towards helping their rescue dogs, Terry and Sally explained.

“We recently took in dogs from a failed shelter,” added APSA treasurer Val Shepherd who was also on hand to accept the donation.

“They needed special medical care which was very costly, so we are particularly grateful to ACT and to everyone who is supporting us at this very busy time.”

APSA is a non-profit, non-kill shelter that rescues, rehabilitates and rehomes all breeds of dogs and cats.

It was founded in 2004 by a group of local expatriates who were worried about the difficult situation and lives of strays and abandoned animals in the Almanzora Valley area.

As well as rescuing animals that would otherwise be on the streets, APSA reduces the number of unwanted puppies by neutering all the shelter’s animals as soon as possible or keeping males and females in separate quarters until this can be done.

It costs APSA approximately €10 a month to feed each rescue dog, plus vets’ bills of at least €250 for vaccinations, neutering, microchipping and the obligatory passport. On top of this, the charity must cover the running costs of the shelter and the Albox charity shop.

Donations of money and items for the shop are always welcome, as is time given by volunteers.

To learn more about APSA, which currently has over 40 rescue dogs looking for a forever home, visit their http://www.apsa.org.es/rescues website.