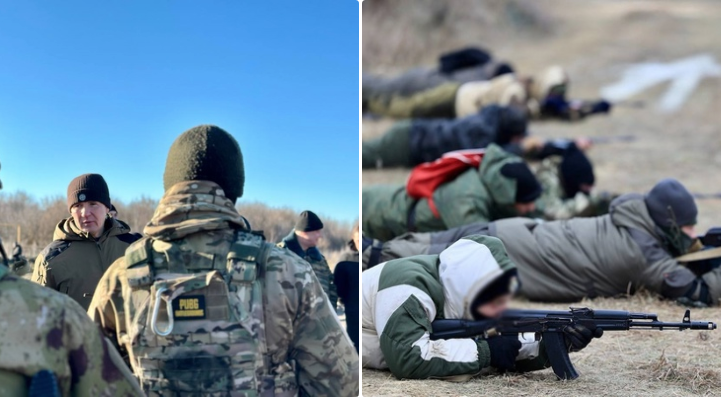 THE governor of Russia’s Belgorod region said that they are looking to form “self-defence battalions” using residents, as reported on Tuesday, December 6.

Belgorod governor Vyacheslav Gladkov announced the formation of “self-defence battalions” from residents of the region.

“Literally from the first days of the start of the special military operation, a large number of residents of Belgorod Oblast have appealed to us to start training and forming territorial defence or self-defence units. This is the decision we have taken,” he wrote on his VK account.

“We are forming several battalions of those who, due to their health or age, cannot be called up to the armed forces, but have combat experience and who have a great desire to defend their homes and families in case of need.”

He added: “In the event of a conflict in the territory of the Belgorod region, the military units are being trained by experienced instructors, who have been through many local wars and have experience in fighting.”

Interestingly, the news comes after it was revealed by Yevgeny Prigozhin, the founder of the Wagner Group –  a network of mercenaries and a de facto private army of Russian President Vladimir Putin – that the PMC was setting up militia training centres in the Belgorod region of Russia.

On Sunday, November 6, answering questions about the rumours, Prigozhin said: “Yes, indeed, we are creating militia training centres [in Kursk and Belgorod regions].

“In my opinion, the militia should consist of the first line, which lies entirely with the people of the region. In order to provide the material component of the militia, I believe we don’t need to turn to government agencies, but to place the responsibility on regional businesses.”

He added: “If you own a small factory which employs 100 people, and 50 of them are sexually mature males, then 25 per cent should serve in the trenches and 75 per cent should continue to work.

“And so it goes round and round – one week in the trenches, three at home and at work. In this case, when the enemy comes to the Russian soil, all 100 per cent will stand up to defend their country.

“For one kilometre of the line of contact today 10 people are enough. For 100 kilometres, 1,000 men. At a distance from them, inland, there should be military units with mobilised men and other facilities with security forces. Locals know their territories like no one else, are capable of fighting DRGs and taking the first strike if necessary.

“I believe, in border territories, we should emphasize conscious business, and in response to their civic position, do not spare to present them with high state awards, and do not be stingy with words of gratitude to their compatriots.”

“This approach has always been and still is in Russia,” he said at the time.

“Training centres of the Wagner PMC will be fully financed by me. I do not need any federal or regional budget.”

He added: “Of course, the question of non-proliferation of small arms in these territories will arise. In the trenches, of course, everyone should stand with weapons, but their carrying should be prohibited in populated areas and outside the defence line.”

Belgorod Region Governor Vyacheslav Gladkov made the announcement via his Telegram channel, stating that his duties will be taken over by his first deputy.

“Anton Ivanov, head of the Belgorod city administration, has tendered his resignation due to a transfer to another job. First Deputy Head of Administration Valentin Valentinovich Demidov has started performing his duties,” he said at the time.

People reacted to the news of the formation of “self-defence battalions” in Belgorod.

“For those still thinking Putin is engaged in 4D chess 😂🤣” one person wrote.

For those still thinking putin is engaged in 4D chess 😂🤣 https://t.co/MjqrXvrOxe

While another wrote: “In the Belgorod region the cowardly inspired Russian government is creating Home Guards units … or so they pretending… what a lot of propaganda for nothing…”

In the Belgorod region the cowardly inspired Russian government is creating Home Guards units … or so they pretending… what a lot of propaganda for nothing… pic.twitter.com/dOmHAAGxvl