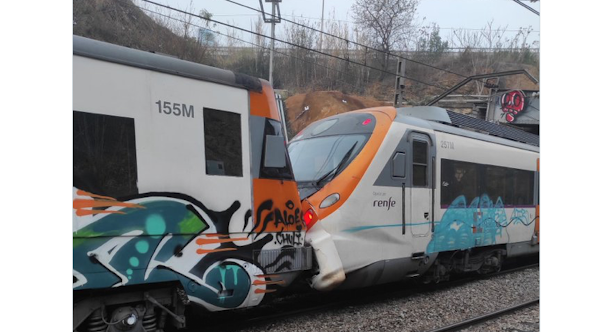 THE number of passengers that were injured after a train collision in Barcelona on Wednesday, December 7 has continued to rise.

UPDATE 9.57 am (December 7) – According to Spain’s Civil Protection, following the collision of two trains at Montcada and Reixac-Manresa station (Barcelona) on Wednesday around 150 people have been slightly injured and another five less seriously.

The Civil Protection unit of Spain’s Guardia Civil said that the affected trains were evacuated in less than half an hour and no one was trapped in the carriages. Three of the injured had to be taken to health centres as a precaution.

ORIGINAL 8.57 am (December 7) – Several passengers have been injured after a train collision in Barcelona on Wednesday, December 7.

Several passengers have been injured to varying degrees after a train collision at the Montcada station (Barcelona) on the morning of December 7.

The incident happened at around 7.50 am when two trains collided with each other.

According to Spanish train operator Renfe, a train travelling towards Barcelona rear-ended another train at the station that was also heading towards the Catalan capital.

The affected trains were on Renfe’s R4 commuter line, which is currently at a standstill, as are the R7 and R12 lines, in both directions.

Renfe sources told Spanish news outlet El Confidencial that the circumstances of the accident are not known at the moment, which has forced the activation of the protocol for this type of accident in collaboration with Civil Protection and the Emergency Medical System (SEM).

Twitter user @aidaperezz_ shared a picture of the incident alongside the caption: “How cute, in Montcada and Reixac the trains that arrive and those that haven’t left kiss each other 👨🏼‍❤️‍💋‍👨🏻 No seriously how scary.”

Josep Jorge also shared a picture of the train collision in Barcelona alongside the caption: “Accident from @rodalies to #Montcada . A parked train with passengers heading #Barcelona has been rammed by another. Several injured. Unforgivable security flaws.”

He added: “Safety is an essential priority. Today, since @rodalies they have put many people’s lives at risk. How many more accidents are needed? This cannot be left with one more apology: investigation and clearing of responsibilities urgently.”