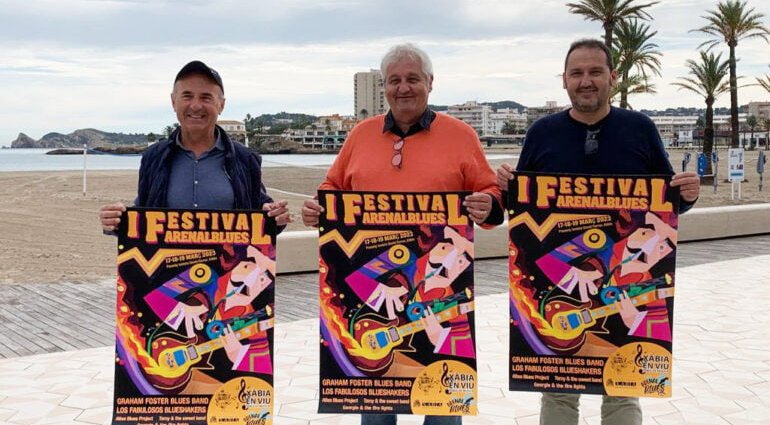 The Arenal Blues Festival will take place from March 17 until 19, coinciding with San Jose weekend celebrations, on the Paseo del Tenis David Ferrer of the Arenal Beach.

The Festival will take place at different points along the Paseo del Arenal, with the concerts being on Friday, March 17, in the afternoon in front of the Octopus, on Saturday, March 18, the performances will be during the afternoon and early evening in the La Fontana area, and on Sunday, March 19, a midday performance at the southernmost end of the promenade will close the festival.

The bands participating in the Arenal Blues Festival include Graham Foster who began his career in 1972 as a bass player in and around London, with acclaimed London pianist Brian Morris’s trio. Discovered by Elton John with the formation of The Foster Brothers, which included his brother Malcolm (bassist for The Pretenders and Simple Minds) and Robbie Mclntosh (guitarist for Paul McCartney and Norah Jones). He came to make an album that was produced by Mike Vernon, known for his collaborations with John Mayall, Eric Clapton, Fleetwood Mac and Freddie King, among others.
Graham has been able to work with the likes of Mark Feltham (Oasis harmonica and Rory Gallagher), M-Clan, Mick Taylor (The Rolling Stones guitarist), The Vargas Blues Band and Kiko Veneno, among others.

The Fabulous Blueshakers: This formation was born in Valencia and they have been on stage since 2007, with Lizzy Lee on vocals, Jorge Gener on harmonica, Ricardo Gener on guitar, Paco Rubiales on bass and double bass and Juanjo Iniesta on drums. With a repertoire that ranges from Chicago blues, jump blues, Texas blues and some rhythm & blues influences, they have been able to capture their full breadth and develop these styles with a surprising feeling and delivery, with a personal air that defines a band with a great projection in the blues panorama of the country.

Georgie & the Fire Lights: This is a band of notable jazz influences, they have adapted their repertoire to present it at the Arenal Blues Festival, and delight us with themes and versions of the different artists and blues styles. The local group includes professional components and teachers from different academies in the area.

Altea Blues Project: This group is a quartet led by German Elul, a musician and guitarist with an extensive career, leading various jazz, blues, Latin, pop, etc. groups. in Alicante, Castellon and Valencia. He has participated in different jazz-blues festivals, such as the Benicasim Blues Festival, and contests with various formations and bands. He is the organiser of the Altea Blues Festival.

Tamy & The Sweet Band: The group is a blues and rock cover band formed in 2019 with the project of merging the best of funk and soul of all time. This band is made up of 6 members: Tamy Meier on vocals, Julian Colomba on guitar, Sergi Sanchez as percussionist, Miguel Diez on tenor sax, Tono Diez (Miguel’s father) on alto sax and Francisco Oliver on sax, all of them influenced by different musical styles, ranging from funk, and soul to rock and blues.