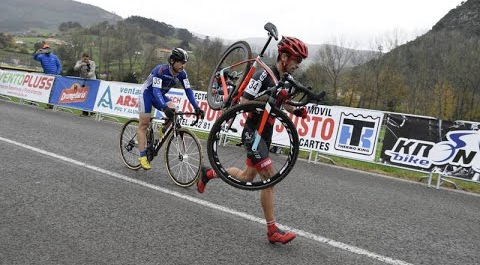 The Champion of Spain and the World Champion in the cycling master’s category Agustín “Guti” Navarro died unexpectedly on New Year´s day.

According to the news site H50policia on Tuesday, January 3 was found dead on New Year’s Eve afternoon in Sama de Langreo (Asturias).

The death of the 44-year-old has come as a great shock to the cycling community, with Guti having won the Champion of Spain in the category of master 30 in 2011 and six years later in 2017 the master’s category 40-44 in the Belgian town of Mol.

In 2018 he was proclaimed European champion and runner-up of the world. He did it already as a member of MMR Bikes, with which he raced in recent years.

Professional cyclist Aida Nuño, current General Director of Sports, said Guti was a quiet but sociable individual who will be greatly missed: “He was a much-loved person in cyclocross.

“For his passion for cycling and sport, and for his cheerful character. He leaves us great memories and great deeds.”

The President of the Asturian Cycling Federation, José Antonio Díaz Soto, ‘Walker’, said that he regretted not being able to give more recognition to a sporting great who was slowly drifting away from the profession.

Guti, who was running a carpentry shop for the City Council of Langreo, was riding less and less with work giving him less time to indulge in the sport that he loved.

The cause of death has not been released but it is believed that the Champion of Spain died due to natural causes.