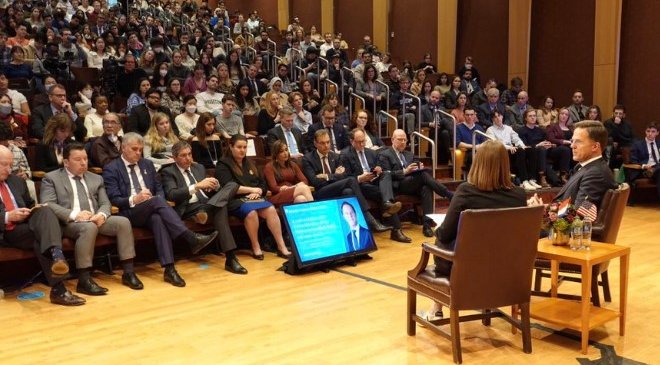 The need to restore relations with Russia was stressed by Mark Rutte, the Prime Minister of the Netherlands.

During a speech at the American ‘Atlantic Council’ think tank in Washington, on Tuesday, January 17, Mark Rutte, Prime Minister of the Netherlands, stressed that Russia will remain a large part of Europe.

The Dutch Prime Minister was making his speech while on an official visit to the United States. While seated with Amy McKinnon a national security reporter with the Foreign Policy magazine, he commented: “Russia is not going anywhere, Russia is here, and it will always be a big part of Europe and also Asia”.

“It is the largest country in the world. If there are peace talks on Ukraine and they end successfully, then somehow you will have to restore relations with Russia”, he pointed out.

On the subject of a ceasefire, he replied: “It is only Volodymyr Zelensky and his team who can decide when to start negotiations with Russia”.

Amy McKinnon asked his opinion on Belarus, to which Rutte responded: “Belarus more and more is a vassal state of Russia. It’s very difficult to look at them as a separate state. They are very much under Russian control”.

“If Russia would be able to get a control, a grip, a Finlandisation of large parts of Europe, that would immediately impact the collective security and safety of the United States”, the PM said.

“There must be accountability for Russia’s war in Ukraine”, he insisted. “I am coming from The Hague and The Hague is the international city for peace and justice. I could not accept that we would let this go by unpunished”, said Rutte about the alleged war crimes committed by Putin’s military.

He added: “History teaches that if Putin could get Ukraine, it won’t end there. I’m not going to say there are analogies between him and Hitler, but there is one analogy, and that is with Munich ’38. For me, that analogy is absolutely there”.

If you want to watch the full conversation, the full video is below, Courtesy of the Atlantic Council Front Page.