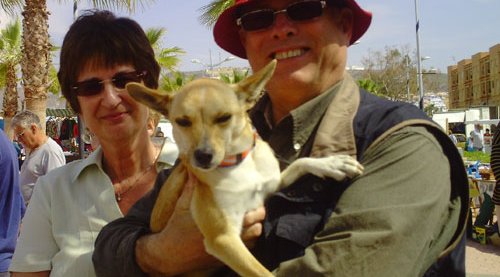 €763 was raised by a charity football match, tombola, bric-a-brac market, a cake stall and a dog obedience display.

The dog obedience display started later than scheduled because one dog owner’s car broke down.

So, when the eleven dogs and their handlers began the display, organised by Antoinette of the Animal Hotel, Aguilas, all the seats were full, and many more people stood, or sat on the ground to watch.

The participants were all rescued dogs, some of which still need to be homed. Antionette said that all dogs, pedigrees or strays can be educated and trained and should be given the chance to live good, happy lives.

She said that puppy-training should start at three months old, not later, when bad habits may have already formed.

During her bilingual presentation, Antoinette told onlookers that the objective of her dog-training, which she offers in five different languages, is to get a sociable dog, and that rewards are very important.

Mandy Marshall of San Animal said she would like to thank everyone involved in making the animal charity weekend such a big success.

She said that the Pulpi town hall had been very cooperative in giving them permission for the event which was held alongside the town’s regular Sunday market.

She also appealed to EWN readers to consider adopting a rescued dog as many are currently with foster owners and need loving permanent homes.

On Wednesday April 11, a local group called the ‘Evolutionists’, is holding a charity petanque championship at 2pm at Annie’s bistro.

The money raised will be donated to the San Animal feral cat sterilisation programme being run with permission from the San Juan town hall. So far, this spring (breeding season), nine female cats have been sterilised, in order to help stop more stray kittens being born.

To sign a team up for the petanque championship, visit Annie’s Bistro.

For more information about San Animal, to offer your support or adopt a dog, contact [email protected]