Cats that can land on their feet 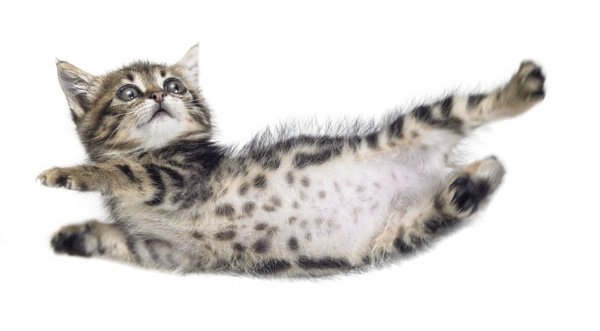 CATS do have a ‘righting reflex’ that operates when they fall.

First, the brain commands the head and neck muscles to put the head ‘square’ with the ground.  Then the rest of the body aligns itself with the head and, hey presto, the cat ends up in a perfect position for a soft landing.

Newborn kittens don’t have this reflex, as it depends on a combination of eye and inner ear messages

It might seem reasonable to assume that the greater the height of the fall, the worse the injuries. This is, however, only true up to a level of seven storeys; after that the fracture rate actually decreases.

This is because after dropping for a distance of about five storeys, the cat reaches maximum speed, the so-called terminal velocity of a falling body.

At this point, the speed is constant and thus the inner ear is no longer aware and stimulated by acceleration. So the cat relaxes and spreads its legs out just as a freefall parachutist does when he is stabilising his descent.

On landing, relaxed bodies are much less likely to fracture, which is also true of infants, and adults who are drunk.

Moggies make the most of light

In a totally blacked-out room, a cat can see no better than you or I.  What it can do, however, is magnify the faintest quantities of light in its surroundings, and it needs only one-sixth of the light we need.  Its eyes possess a light-intensifying screen made up of 15 layers of cells containing glittering, iridescent crystals the tapetum lucidum, set behind the retina.

This screen reflects every speck of light after it has been processed by the retina, doubling the effect.  It is this that makes cats’ eyes flash in the dark, and probably inspired Willliam Blake’s famous lines: ‘Tiger! Tiger! Burning bright, in the forest of the night.’ Though cats can’t see colour as well as we do, their black-and-white vision is better and they can distinguish up to 25 different shades of grey.