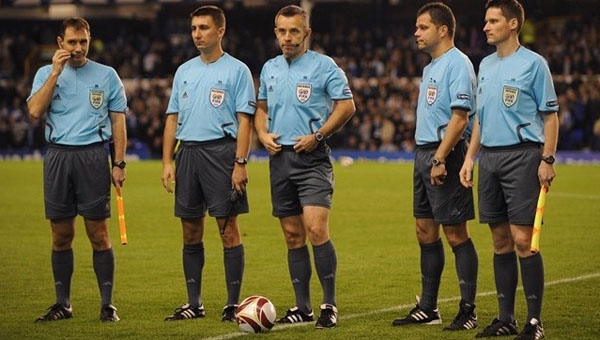 NYON, Switzerland (AP) — With a World Cup waiting at season’s end, Europe’s top referees know they are under intense scrutiny when the Champions League starts next week.

UEFA wants its match official teams to get more offside decisions correct after high-profile errors in its marquee club competition last season. Also, a new interpretation of the offside law has brought more potential for controversy.

The 19 European referees in contention for perhaps 10 tickets from FIFA to work in Brazil next year know any misjudgment could wreck their ambitions for the season.

“That is our life,” Bjorn Kuipers of the Netherlands told The Associated Press in a recent interview about the pressure referees face.

“Of course, FIFA will look at Champions League or Europa League matches,” said Kuipers, who worked the Brazil vs. Spain Confederations Cup final in June. “It’s good that they follow you in the whole season.”

FIFA is expected to announce in January which teams of match officials — a referee and the two assistants he works with regularly — have been selected for World Cup duty.

Until then, European referees will be in the middle of Champions League group stage action where most World Cup stars perform for their clubs.

“Certainly there were some mistakes, I can’t say everything was perfect,” Pierluigi Collina, UEFA chief refereeing officer, acknowledged at a briefing during a training seminar for elite match officials.

A Zlatan Ibrahimovic goal for Paris Saint-Germain in the first leg against Barcelona ultimately did not deny the Spanish side a semifinals place.

However, in a chaotic, thrilling end to the Borussia Dortmund vs. Malaga second leg, all three late goals in the Germans’ 3-2 victory appeared to be offside on TV replays.

“If we want to be considered reliable and credible, we can’t say nothing happened,” Collina said. “It is much more important to say something happened and work on it and try to ensure nothing is repeated.”

The Italian former referee — the most respected of his generation who handled finals of the 1999 Champions League and 2002 World Cup — showed reporters how UEFA uses video technology to help assistants hone positioning and judgment in repeated drills of borderline calls.

Collina estimates there are 1,300 offside calls in a Champions League season, and officials’ judgment will probably be questioned even more as teams and fans get to grips with new nuances in football’s Law 11.

Now, attackers receiving the ball while standing in offside positions are not committing an offense if they did not challenge for the ball, but received it from a “deliberate act” such as a misplaced backpass.

Collina said the key is weighing if the defending team’s final touch is a “deliberate act or instinctive reaction.”

Serbian referee Milorad Mazic, one of UEFA’s elite category referees and a World Cup candidate, said the change adds responsibility to his assistants.

“Maybe it’s a little bit harder for the assistants, but it’s better for football,” Mazic said.

To help teach the assistants, Collina employs his two World Cup final colleagues: Philip Sharp of England and Leif Lindberg of Sweden. Their job is to find reasons underlying the mistakes.

“There is always a reason,” Collina said. “I can’t accept that someone justifies a mistake by saying, ‘I am unlucky.’ He’s not a gambler.”

And while UEFA keeps private any criticism, Collina’s judgment becomes evident when an officiating team gets no further assignments in a competition or tournament.

“Immediately after the game we are analyzed by the observer,” Serbian ref Mazic said. “We are aware (of mistakes) . if you are not aware immediately on the pitch.”

Slovenian referee Damir Skomina, a leading contender for most major assignments, insists that referees’ criticism of themselves is more important than public opinion.

“I need to be honest until the end with myself immediately after the match,” Skomina said. “I don’t give a lot of attention to what the world says in the media.”