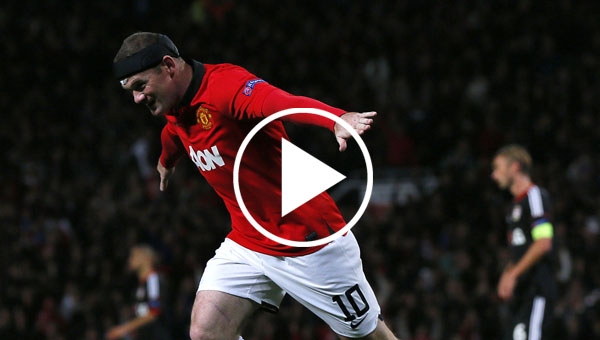 MANCHESTER, England (Reuters) – Wayne Rooney scored twice to chalk up 200 goals for Manchester United as his side beat Bayer Leverkusen 4-2 in their Champions League Group A opener at Old Trafford on Tuesday.

Rooney put the English champions ahead in the 22nd minute with a close-range volley and had chances to stretch the lead before Leverkusen captain Simon Rolfes levelled after 54 minutes.

Robin van Persie re-established the three-times European champions’ lead five minutes later with an acrobatic volley and Rooney made amends for an earlier miss by squeezing home a right-footed shot after a defensive mix-up.

Antonio Valencia made it 4-1 after 79 minutes before Omer Toprak’s late consolation for Leverkusen as United’s David Moyes enjoyed his first taste of managing in the Champions League group stage with a victory.

United, who had not scored a goal in open play in their last three matches, showed an intent to remedy that with an attack-minded lineup as midfielders Shinji Kagawa and Marouane Fellaini made their first starts of the season.

After dominating possession, the hosts seized the initiative when Patrice Evra crossed to an unmarked Rooney, whose volley bounced over Leverkusen keeper Bernd Leno.

The goal was controversial, though, with Leverkusen players claiming offside in the build up and obstruction by Valencia on Leno as Rooney’s shot flew in.

Rooney went close to a second with a free kick shortly before halftime that went over the wall and just wide while Kagawa missed by a whisker.

Wearing a headband to protect a gash on his forehead, Rooney should have scored just after the break when Toprak’s backpass fell short and the England striker rounded the keeper only to fire across the face of goal rather than shoot into an open net.

The misses might have become costly as a livelier Leverkusen pushed for an equaliser, finding one when Son Heung-min picked out Rolfes, whose first-time left-foot shot curled into the corner via a slight deflection off Michael Carrick.

However, United, drawing on their European experience despite their manager’s lack of it, pulled ahead again through Van Persie when the Dutchman volleyed in Valencia’s cross with Leno slow to react.

Rooney pounced on Leverkusen’s defensive mistake to register his 200th goal for United, and he had time to set up Valencia for United’s fourth of the evening before being substituted to a standing ovation.