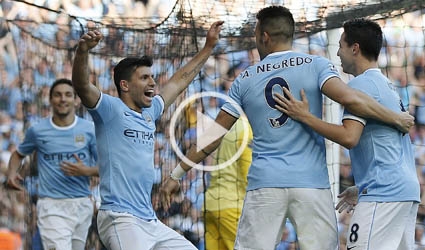 LONDON (Reuters) – David Moyes endured a humiliating first derby in charge of Manchester United as the champions suffered a crushing 4-1 defeat at Manchester City on Sunday.

Sergio Aguero scored twice while Yaya Toure and Samir Nasri were also on target for a rampant City as they moved into third place, two points behind early pace setters Arsenal and Tottenham Hotspur who both won to continue their strong starts.

Aaron Ramsey scored his seventh goal of the season as Arsenal beat Stoke City 3-1 at the Emirates Stadium while Brazilian Paulinho struck deep into stoppage time to earn Tottenham a 1-0 victory at Cardiff City.

Swansea City followed up a notable 3-0 Europa League win in Valencia in midweek with a 2-0 victory at Crystal Palace that moved Michael Laudrup’s side into mid-table.

It was events at the Etihad Stadium that reverberated around the Premier League though as United were blown away in their first derby without Alex Ferguson in charge since 1986.

Ferguson, who ended his glittering reign at United last season having won the title 13 times, was not present as his successor suffered a chastening afternoon — his side conceding three goals in five minutes either side of halftime.

Wayne Rooney curled in a precision free kick with the clock ticking down to become the highest United scorer in the history of the fixture but it was about the only ray of sunshine on a dreadful day for the Reds who were second best throughout.

“Maybe the game meant a little bit more to us than for them,” City skipper Vincent Kompany told Sky Sports after leading City to their fourth victory in five league games against the 20-times league champions.

While Moyes was left to pick up the pieces, his City counterpart Manuel Pellegrini,, also sampling the atmosphere of a Manchester derby for the first time, was celebrating a display which sent out a powerful message to the title contenders.

“I’m very happy, not because of the win but the way we played,” Pellegrini,, whose side had lacked a little spark so far this season, told Sky Sports.

“No-one believes that 4-1 is possible before the game. For the fans they will be happy for the month now.”

United have picked up only seven points from five league games and there will be no respite for Moyes whose team face arch rivals Liverpool in the League Cup on Wednesday.

Moyes was deprived of injured striker Robin van Persie on Sunday but offered no excuses for a woeful display.

“If you lose four you are not expecting to win too many. We conceded poor goals. We got better as the game went on but it was too late.”

City began with more urgency and took the lead when a flowing move saw Aleksandar Kolarov’s cross pick out Aguero who produced a superbly improvised volley.

United looked like reaching the interval with no further damage but Toure turned in Alvaro Negredo’s header with his knee. Aguero struck again two minutes after the interval when the Argentine was again left unmarked to tap in.

With United staggering on the ropes Jesus Navas then broke down the right and picked out Nasri to volley City’s fourth.

Patrice Evra hit the post for United before Rooney, still wearing protection on a head cut, beat Joe Hart with a beauty.

“I thought Wayne Rooney’s performance was outstanding,” Moyes said. “He didn’t deserve to be on the losing side today.”

Arsenal fans came to acclaim record signing Mesut Ozil on his home debut and were rewarded as the German international had a hand in his side’s three goals.

His free kick after five minutes was not held by Stoke keeper Asmir Begovic and Ramsey poached the rebound.

Stoke did equalise after 26 minutes through American Geoff Cameron but Per Mertesacker then headed in Ozil’s cross and Bacary Sagna’s loppy header, again from an Ozil pass, sealed the points for the Gunners.

“When you look at his numbers, the assists are not a coincidence, they are a reality of his game,” Arsenal boss Arsene Wenger told reporters.

“I believe that once he is completely integrated we will see even more of him. But he’s shown today that he is a great player. He gave a lift to everyone in the club.”

Tottenham looked like being frustrated at Cardiff whose keeper David Marshall was in fine form, but struck late through Paulinho, one of several pre-season signings.

“Today it was different from normal in that there was justice in football,” Spurs manager Andre Villas-Boas said. “We created so many chances that there could only be one winner.”

Tottenham have conceded only once in the league this season, in a 1-0 defeat at Arsenal, but stay behind their north London rivals who have superior goal difference.