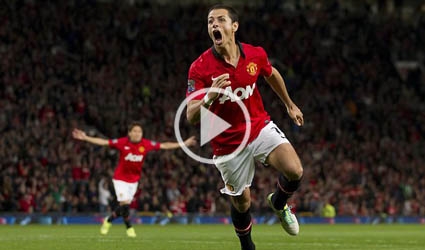 LONDON (Reuters) – Javier Hernandez poached a second-half winner as Manchester United beat arch-rivals Liverpool 1-0 to move into the English League Cup fourth round on Wednesday, subduing Luis Suarez on his return from a 10-match ban.

Mexican Hernandez lost his marker and steered home a Wayne Rooney corner a minute into the second half and United held on despite being outplayed for large periods by a Liverpool side welcoming back Uruguayan Suarez for the first time since April.

It was a welcome fillip for United manager David Moyes, who had been desperate to avoid a second defeat to a major rival in quick succession after Sunday’s 4-1 Premier League loss to Manchester City.

Arsenal set up a fourth-round clash against Chelsea, coming through a penalty shootout against West Bromwich Albion after the match had finished 1-1 after extra time.

An inexperienced Arsenal side had trailed 3-1 in the shootout but won 4-3 with Nacho Monreal netting the decisive spot-kick.

There was gloom for holders Swansea City who suffered a shock 3-1 defeat by second tier Birmingham City and Papiss Cisse scored his first goal since April as Newcastle United beat Leeds United 2-0.

Premier League Stoke City also booked a spot in the next round, winning 2-0 at third tier Tranmere Rovers.

Suarez, who missed the end of last season and the start of this one for biting Chelsea’s Branislav Ivanovic, had dominated the headlines in the run-up having caused controversy in previous games against United.

The script was written for him to make a decisive impact, but he was upstaged by Hernandez who showcased his finely-tuned eye for a goal with a typically clever finish.

He left his marker Jose Enrique flat-footed in the box and found a metre of space to sidefoot home.

“The movement is great for the goal, that’s what Chicharito is all about. He finds space so well,” Moyes told Sky Sports.

The goal was largely against the run of play as Liverpool dominated possession, but their neat and tidy approach play frequently lacked any end product.

While United made eight changes from the team that lost to City, Liverpool picked arguably their strongest side and quickly adapted to a change in formation with boss Brendan Rodgers opting to play a back three.

Suarez missed a good chance due to a heavy touch in the first half and crashed a free kick against the bar in the second, but the visitors’ best opportunity fell to on-loan Victor Moses.

He headed an Enrique cut-back straight at United keeper David De Gea from 10 metres to leave Liverpool without a win in three games after a bright start to the campaign.

Arsenal had looked to be heading out of the competition when they were two goals down in a penalty shootout against West Brom but Craig Dawson and Morgan Amalfitano missed for the hosts, allowing Monreal to smash home the decisive kick.

The match had finished 1-1 with Arsenal’s 20-year-old German midfielder Thomas Eisfeld grabbing the opener on 61 minutes in his second game for the club, before Saido Berahino headed in at the far post to level 10 minutes later.

Dan Burn, Matt Green, Tom Adeyemi were all on target as 2011 League Cup winners Birmingham caused an upset against Premier League Swansea for whom Wilfried Bony grabbed a late consolation.

Newcastle’s Cisse scored with a header in the 31st minute, his first goal after drawing a blank in his last 11 games, and Yoan Gouffran wrapped up the victory midway through the second half.