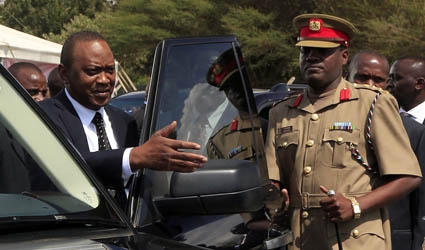 NAIROBI (Reuters) – Kenyan authorities are holding eight people in connection with an attack by Islamist militants on a Nairobi shopping mall and have released three others after the assault that killed 67 civilians and soldiers, the interior minister said on Friday.

Somali Islamist group al Shabaab suggested Saturday’s attack, followed by a four-day siege, would be followed by other actions by its ‘warriors’.

A top Kenyan military official played down reports of a build up of Kenyan forces near the Somali border, saying that troops who had gathered near Somalia were rotating to join African peacekeepers there and replace other Kenyan soldiers.

Al Shabaab said it launched the attack to demand that Kenya withdraw its troops from Somalia, where Kenyan forces deployed in 2011 to strike at the group which Nairobi blamed for attacks and kidnappings in Kenya’s northern area and coastline.

President Uhuru Kenyatta has said Kenya will not withdraw.

The attack on Westgate mall confirmed Western and regional fears about al Shabaab’s ability to strike beyond Somalia’s borders. It also dented Kenya’s vital tourism industry, although the finance minister said it would not have a long-term impact.

“Police are holding eight suspects as they seek to unmask the face behind the terror attack. Three others were interrogated and released,” Interior Minister Joseph Ole Lenku told a news briefing.

He said suspects were being held under anti-terrorism laws meaning they could be held “for longer periods before being arraigned in court,” although he did not give details.

Ole Lenku said investigators trying to determine the identity of the attackers were searching through the rubble of the mall where three floors collapsed after a series of blasts and a huge blaze. He said they were making “good progress”.

Kenyan and Western officials have said they cannot confirm speculation that Briton Samantha Lewthwaite, widow of one of the 2005 London suicide bombers, had a role in the mall attack. Some survivors said they saw an armed white woman.

Kenya requested a “red alert” wanted notice issued by Interpol for Lewthwaite, dubbed the “White Widow” by the British media, but said she was wanted in connection with a previous 2011 plot that was also linked by police to al Shabaab.

The Somali group, which taunted Kenya during the mall raid when its militants were still holding out, issued a new threat.

“The mesmeric performance by the #Westgate Warriors was undoubtedly gripping, but despair not folks, that was just the première of Act 1,” the group said on Twitter, @HSM_PR, a handle it often changes as its accounts are regularly suspended.

Ole Lenku repeated Kenya’s determination not to withdraw from Somalia, saying it was a mission of “national security”.

“That threat has not been eliminated and therefore it has not changed our position. It has been very clear that we will continue to take action on that front until our security and interests in the country are protected,” said Ole Lenku.

Kenyan soldiers, with other African troops in an African Union force, have driven al Shabaab out of the Somali capital Mogadishu and other urban areas but the group controls swathes of countryside.

A top-ranking official from the Kenya Defence Forces told Reuters fresh troops were moving in to replace existing ones.

“We have soldiers coming out of Somalia and soldiers going in, as part of the same contingent the country is contributing to AMISOM,” he said, using the African Union force’s acronym.

The interior minister said there were no formal reports of people still missing since the attack. The Kenyan Red Cross has previously said dozens were still missing.

There are fears the high-profile attack could hurt Kenya’s economy, especially its $1 billion a year tourism industry.

But Kenya’s finance minister, Henry Rotich, said economic growth in 2013 would still be 5.5 to 6 percent and plans to issue the nation’s debut Eurobond would go ahead in the financial year ending in June.