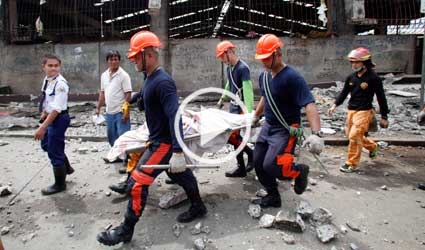 CEBU CITY, Philippines (Reuters) – A powerful earthquake measuring 7.2 struck islands popular with tourists in the Philippines on Tuesday, killing at least 74 people, some as they prayed in a centuries-old church, and causing widespread damage to infrastructure, officials said.

Low-rise buildings collapsed on at least two islands and historic churches in the predominantly Catholic country cracked and crumbled during the quake, which sparked panic, cut power and transport links and forced hospitals to evacuate patients.

At least 65 people died in collapsed structures and landslides on the island of Bohol, 630 km (390 miles) south of the capital, according to a report from the region 7 office of the National Disaster Risk Reduction and Management Council (NDRRMC).

The report said eight others died in Cebu and another on Siquijor island. An earlier report had put the death toll in Cebu at nine.

More than 260 were wounded on Cebu and Bohol islands.

President Benigno Aquino said he would visit earthquake-damaged areas on Wednesday. “Many of the structures there are old,” he told reporters after attending the briefing.

The death toll looks bound to rise. Dennis Agustin, Bohol provincial police director, said in a radio interview as many as 77 people had died in 11 towns on the island, much of which was left without power and communications.

Four bridges and some government buildings collapsed in Bohol. Roads cracked, with many declared impassable due to landslides, prompting the authorities to declare a state of calamity in the province, along with Cebu.

Renato Solidum, head of the state seismology agency, said the magnitude 7.2 tremor had struck near Carmen town on Bohol island at 8:12 a.m. (0012 GMT).

The volcanology agency said it was measured at a depth of about 56 km (35 miles).

Hospitals moved patients to open spaces as aftershocks rocked Cebu, a city of about 870,000 people.

Rey Balido, NDRRMC spokesman, said at least eight people who had been queuing for government aid payments in Cebu were hurt in a stampede sparked by the earthquake. A four-year-old girl died in the stampede, said Social Welfare Secretary Corazon Soliman.

Roman Catholic Archbishop Leonardo Medroso of Tagbilaran city in Bohol said two people were killed by falling debris as they were praying in a church in the town of Loon. The church, Bohol’s biggest, dates from 1753.

He said a church in Loboc town was also damaged and that both were designated historical treasures. The belfry of the church in Baclayon, one of the oldest in Bohol province, had crumbled and its facade was cracked.

“The quake was really strong. I am 75 years old already, I have undergone so many earthquakes, but this is the strongest I have experienced,” he told Philippine television.

Television showed that the belfry of the Basilica Minore del Sto. Nino de Cebu, built in the 1700s, had collapsed.

Airline Cebu Pacific cancelled flights to Cebu and Bohol due to the aftershocks and damage to airports. Ferry services were also suspended.

Television showed the collapsed viewing deck of Bohol’s most famous tourist attraction, the Chocolate Hills in Carmen town, which is at the epicentre of the quake.

There were no reports of any foreign tourists among the casualties.

Strong earthquakes are common in the central Philippines.

Tens of thousands of people were ordered from their homes when a tsunami warning was issued after an undersea quake in the region in September 2012. One person was killed in that quake, which resulted in only minor damage and small waves.